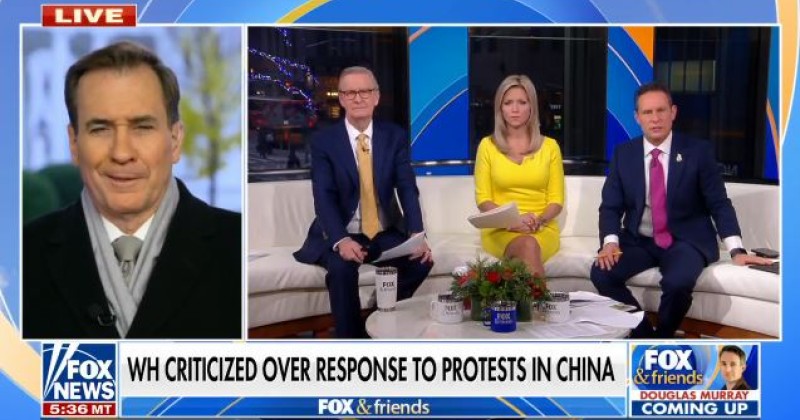 The Biden White House says it “isn’t taking a side” on the cause of anti-lockdown protests in China, a ‘walking on eggshells’ remark seemingly designed to protect the administration from charges of hypocrisy.

While Chinese citizens are now clearly being subjected to human rights abuses in the name of maintaining a brutal lockdown, the White House could only respond with a mealy-mouthed statement.

Appearing on Fox News Channel’s “Fox & Friends,” White House NSC Coordinator for Strategic Communications John Kirby was asked if the Biden administration agreed with protesters that COVID restrictions should be lifted and whether President Xi Jinping should stand down.

Kirby prevaricated by saying the White House was “on the side of peaceful protest,” but that the administration was not “taking a side in terms of what these protestors are about.”

“I would not say at all that we would agree with criticism that we’ve been less than firm or consistent. In fact, Brian, we’ve been very, consistent about the right of peaceful protest and we’ve been very vocal about it in China just over the last few days,” said Kirby.

“We believe that these individuals should be able to peacefully protest and assemble and to make their minds known to their government there in China just like we’ve said the same in Iran and around the world. And we stand up for peaceful protest, and again, we’ve been very consistent about that,” he added.

Co-host Steve Doocy then asked, “Absolutely, the White House is always for peaceful protests, but, John, you know what the protesters are saying, they’re saying, hey, Xi Jinping’s got to go or loosen the COVID restrictions that are keeping people stuck in their houses for months. So, between he’s got to go or loosen restrictions, which side is the White House on when it comes to supporting the protestors?”

Kirby responded, “Steve, we’re on the side of peaceful protest. We’re on the side of individuals being able to freely assemble and to express their views, whatever those views are. We’re not taking a side in terms of what these protestors are about. Largely though, Steve, you know that these protesters are really out there about the lockdown. Their main concern, what drove them to the streets was the very severe, very stringent COVID policies by Xi’s administration, and that’s what’s really been driving all this public protest.”

The spokesman then asserted, “we don’t believe, here in the United States, that lockdowns are the answer.”

This doesn’t correlate with what Biden himself has said on many occasions.

Back in August 2020, the president said he wouldn’t hesitate to lockdown the entire United States if it was necessary to stop COVID.

“I would shut it down; I would listen to the scientists,” said Biden at the time.

In comparison, two months previously in June, President Trump told Fox News, “We won’t be closing the country again. We won’t have to do that.”

Indeed, if the presidential election had taken place a year earlier, there’s almost no doubt that Biden would have lobbied for for more draconian lockdowns that those that were imposed by states during the final 10 months of the Trump administration.

As we highlighted yesterday, Anthony Fauci once again defended brutal Chinese lockdowns, admitting that the Communist government is forcefully locking people inside buildings but adding that if it means people get vaccinated then he is “okay” with it.