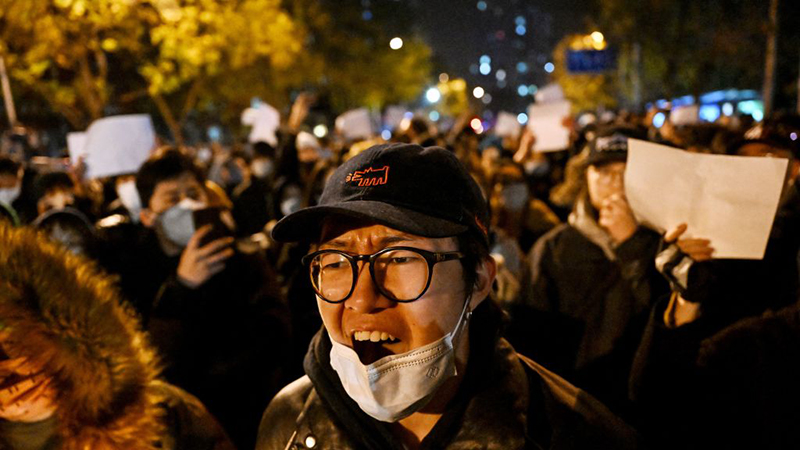 Protests in China over President Xi Jinping’s zero-tolerance Covid-19 measures have intensified – expanding from Beijing and the far western Xinjiang region to several other major cities, including Wuhan, Shanghai, and the eastern city of Nanjing, according to video and photos circulating on social media.

The weekend protests followed Friday demonstrations in Urumqi, the capitol of Xinjiang, after a deadly fire killed residents who were locked inside following lockdowns which have lasted more than 100 days. Officials have reported 10 deaths in the fire, however citizens have reported up to 40 who perished.

The protests are a rare display from a typically compliant citizenry, who know that crackdowns on dissent have intensified over the past decade. As the Wall Street Journal notes, ” Having protests over the same issue break out in multiple Chinese cities is almost unheard of, outside of nationalist outpourings, such as anti-Japanese protests.”

Since the Tiananmen Square protests in 1989, the ruling party has allowed some local demonstrations, but made it a priority to prevent nationwide protests.

On Saturday, videos circulating on social media showed crowds gathering on a street in central Shanghai calling for a lifting of lockdowns. The videos were verified by Storyful, a social-media research company owned by News Corp, parent company of The Wall Street Journal. -WSJ

Protests are calling for Xi Jinping to step down

During Saturday evening demonstrations in Shanghai – the largest city in the country, people were openly heard shouting anti-government slogans such as “Xi Jinping, step down!” and “Communist party, step down!” the BBC reports.

Demonstrators held blank white banners and lit candles to honor the victims in the Urumqi fire.

One Shanghai protester told the BBC that he felt “shocked and a bit excited” at so many people in the streets – saying it was the first such large-scale demonstration of dissent. A woman told the BBC that police said they feel “the same as you” about the protests, but “they wear their uniforms so they’re doing their job.”

As the Epoch Times notes; At Beijing’s prestigious Tsinghua University, dozens of people held a peaceful protest against COVID-19 restrictions, according to images and videos posted on social media.

One student who saw the Tsinghua protest described to Reuters feeling taken aback by the protest at one of China’s most elite universities, and Xi’s alma mater.

“People there were very passionate, the sight of it was impressive,” the student said, declining to be named given the sensitivity of the matter.

According to the report, “analysts say the government appears to have drastically underestimated growing discontent towards the zero-Covid approach, a policy inextricably linked to Xi Jinping who recently pledged there would be no swerving from it.”

In other areas of the country witnesses gave accounts of police violence, with one protesters telling AP (so who knows if it’s true) that one of his friends had been beaten by police, while two others were pepper sprayed.

The BBC saw police officers, private security guards and plain-clothed police officers on the streets, confronting protesters who assembled for a second day.

Demonstrators who led anti-government chants were taken away, and punched or pushed up against a police car in some cases.

Photos and videos have also emerged online that showed students launching their own protests at universities in Beijing and Nanjing on Saturday. -BBC

On Sunday, hundreds of people were seen demonstrating in Wuhan, where the Covid-19 pandemic began.

And of course, Taylor Lorenz is cheering China’s zero-covid policy.