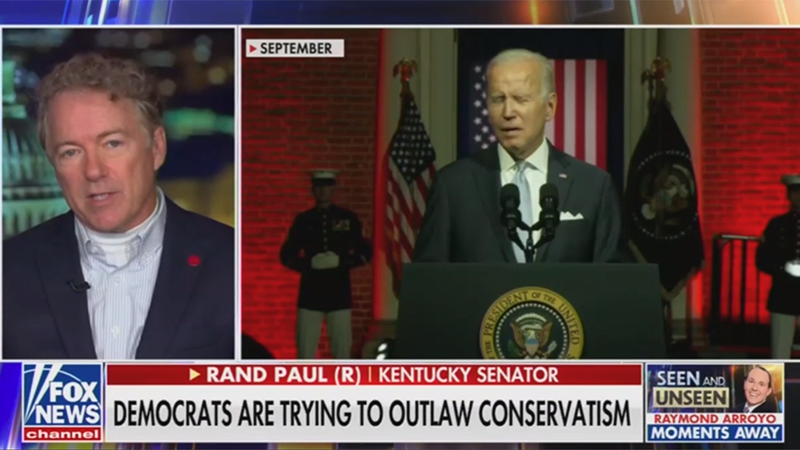 In the wake of fresh revelations that The Department of Homeland Security has been working relentlessly to shut down speech it deems to be ‘dangerous’ or ‘disinformation,’ Senator Rand Paul has promised to introduce legislation that would make it illegal for government agencies and private big tech to secretly collude on such enterprises.

Appearing on Fox News, Paul said of the Democratic Party, “You know, for all the talk of democracy, it seems to be that they’re undermining the very basic principles of our constitutional republic.”

“Freedom of speech was listed in the first amendment because it was one of the most important rights that our Founders thought should be protected. But having the government collude with Big Tech to censor speech is something that goes against every grain of everything that anyone has ever spoken about as far as freedom of speech,” Paul urged.

The Senator continued, “So when we get back in session, I’m going to introduce legislation that will forbid the government from colluding with private companies to censor speech.”

Paul further explained that “this is a tricky situation because many people believe that the First Amendment doesn’t allow us to regulate the speech of private companies. But without question, we can regulate the government, and we can prevent and forbid the government from colluding with private tech on speech.”

“I think we should also preclude them and prohibit them from gathering up our data,” Paul further asserted, adding “we can’t really tell people on the Internet they can’t collect our data, you know, for sales and for marketing. But we can tell the government they can’t collect that data, because I don’t want the government profiling every citizen.”

“That goes against everything that we all believe in as far as the foundation of our constitutional republic,” The Senator proclaimed.

Paul further charged that Democrats “actually want to emulate China,” noting that “They would weld your doors shut if they could.”

Referring to his father former Texas Congressman Ron Paul, The Senator noted “my dad warned — he warned early on that this kind of going after terrorists would ultimately be used on us.”

“When they finally came and used the Patriot Act on Donald Trump, that was when we knew this wasn’t about terrorism, it was about suppressing dissent from people they disagree with,” Paul stated.

As we highlighted yesterday, ‘fact checking’ isn’t the real principle driving the Biden regime’s drive to censor, as they continue to pump out their own disinformation on social media.