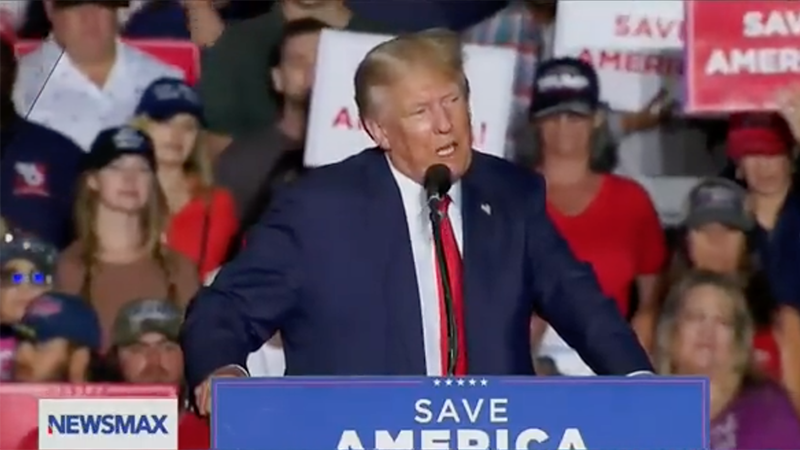 Donald Trump slammed Joe Biden Sunday at a rally in Arizona Sunday, calling Biden’s recent “armageddon” warning “exactly the wrong thing” to say, and demanding “an immediate negotiation of a peaceful end to the war in Ukraine.”

“We have to be very smart and very nimble,” Trump told the crowd of thousands, adding “We have to know what to say, what to do. And we are saying exactly the wrong thing.”

He continued, “We must demand immediate negotiation of a peaceful end to the war in Ukraine, or we will end up in World War Three and there will never be a war like this.”

“We will never have had a war like this and that’s all because of stupid people that don’t have a clue. And it’s also because of the kind of weaponry that’s available today,” Trump further warned.

“We have a president who is cognitively impaired and in no condition to lead our country,” Trump charged, adding that Biden “is now casually talking about nuclear war with Russia, which would be World War Three and far more devastating than any of the previous wars, because of the weaponry that no one even wants to think about or discuss.”

During an earlier rally on Saturday in Nevada, Trump told the crowd “If Republicans win, The Communists lose. The globalists lose. The deep state bureaucrats lose. The Silicon Valley censors lose. The corrupt Fake News lose. The media bosses lose. And the RINOs lose.”

#DinnerGate: Trump Hounded For Having ‘Unacceptable’ Dinner With Kanye West and Nick Fuentes

#DinnerGate: Trump Hounded For Having ‘Unacceptable’ Dinner With Kanye West and Nick Fuentes 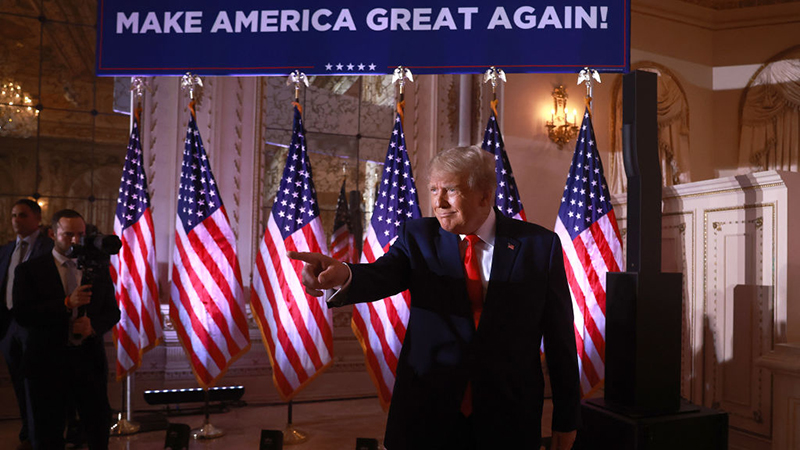 Former President Donald Trump is being hounded by the media and former allies like David Friedman and Ben Shapiro for having an “unacceptable” dinner with Kanye “Ye” West and Nick Fuentes at Mar-a-Lago on Tuesday.

Friedman, who Trump appointed as the US Ambassador to Israel and gave free reign to do everything possible to advance Israel’s interests, showed his gratitude to our former president on Friday by attacking him for having an “unacceptable” dinner with “human scum” like Nick Fuentes and “an antisemite” like Ye and ordering him to “disavow them and relegate them to the dustbin of history where they belong.”

“To my friend Donald Trump, you are better than this,” Friedman said. “Even a social visit from an antisemite like Kanye West and human scum like Nick Fuentes is unacceptable. I urge you to throw those bums out, disavow them and relegate them to the dustbin of history where they belong. I condemned Barak [sic] Obama associating with Louis Farrakhan and Jeremiah Wright. This is no different. Antisemites deserve no quarter among American leaders, right or left.”

Ben Shapiro, the NeverTrumper who got on the Trump train after Trump got elected and did everything possible to advance Israel’s interests, also attacked Trump over #DinnerGate.

The Republican Jewish Coalition also slammed Trump for eating dinner with guests they did not approve of.

“We strongly condemn the virulent antisemitism of Kanye West and Nick Fuentes and call on all political leaders to reject their messages of hate and refuse to meet with them,” the RJC said.

GOP Chairwoman Ronna McDaniel on Sunday joined the pile on, telling the media in a statement: “As I had repeatedly said, white supremacy, neo-Nazism, hate speech and bigotry are disgusting and do not have a home in the Republican Party.”

Anti-Defamation League CEO Jonathan Greenblatt, who praised Trump for moving the US embassy to Jerusalem in 2017, expressed nothing but hatred and scorn for the former president upon hearing of his unauthorized dinner.

“Nick Fuentes is among the most prominent and unapologetic antisemites in the country,” Greenblatt told the New York Times. “He’s a vicious bigot and known Holocaust denier who has been condemned by leading figures from both political parties here.”

“If anyone still had any doubts about Donald Trump’s embrace of bigotry and division, it’s certainly clarifying to see him spend time openly and unapologetically with notorious antisemites Nick Fuentes and Kanye West,” Greenblatt said on Twitter. “Awful, appalling and yet entirely in character.”

A “longtime Trump adviser” apparently went to NBC News on Friday to attack the former president and shill Ron DeSantis.

“This is a f—ing nightmare,” said one longtime Trump adviser who spoke on condition of anonymity for fear of stoking the former president’s ire at “disloyal” people who criticize him. “If people are looking at [Florida Gov. Ron] DeSantis to run against Trump, here’s another reason why.”

The Biden White House also denounced Trump over the dinner.

“Bigotry, hate, and antisemitism have absolutely no place in America — including at Mar-A-Lago,” Deputy White House Press Secretary Andrew Bates said on Saturday. “Holocaust denial is repugnant and dangerous, and it must be forcefully condemned.”

Biden told reporters when asked what he thinks about the dinner, “You don’t want to hear what I think.”

“Imagine if president Obama had dinner with some whackadoo black activist who said ‘kill all the white people’ and you’ll see how the press is severely underplaying trump’s dinner w nick fuentes and what that means about the modern gop,” far-left journo Oliver Willis commented on Twitter.

If Trump wants to be president, he needs to learn that all of his dinner guests must first be run by the RJC, ADL and David Friedman. If and only if they give permission should he be allowed to dine with them.

Ron DeSantis would never even think of having dinner with anyone the RJC, ADL and David Friedman don’t approve of — that’s what makes him presidential material!

“These guys might have really been holding Trump back.” 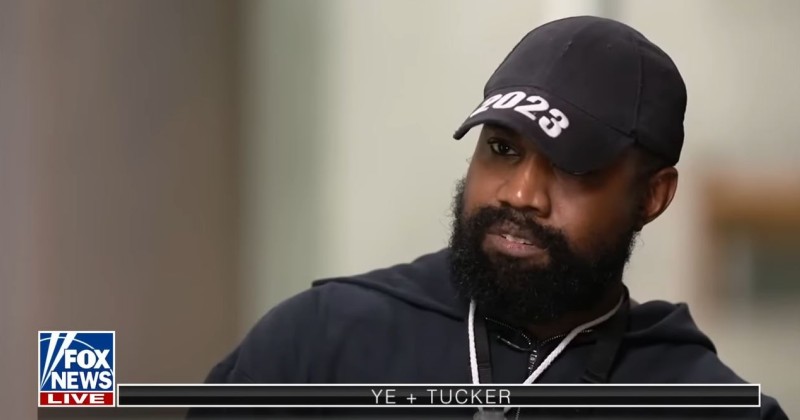 “After talking to them, and really sitting with Jared and sitting with Josh and finding out other pieces of information, I was like wow, these guys might have really been holding Trump back,” said Kanye.

Kanye also claimed that Jared Kushner and his brother Josh only arranged the Abraham Accords between Israel and Arab countries to “make money.”

During the interview, West appeared to be somewhat nervous about the subject, at one point asking Carlson, “All these things with Israel … I just think it was to make money. Is that too heavy-handed to put in this platform?”

“I just think that that’s what they’re about, making money, I don’t think they have the ability to make anything on their own, I think they were born into money,” West said.

“For me as a maverick and a talent and a person that has been beaten, kicked, lost everything, said to have lost my mind… It’s a weird thing. A person who has built something from nothing when I sit across the table from Josh Kushner and he feels so entitled to that idea and this person has never brought anything of value other than being a good venture capitalist, I have a major issue with that. It makes me feel like they weren’t serving my boy Trump the way we could have.”

Kanye West on the Kushner family: “They are all about making money, I don’t think they have the ability to make anything on their own, they were born into money” pic.twitter.com/Va3BgzJhkw

As Chris Menahan notes, “Though West didn’t know the minutia of Kushner’s dealings, his suspicions were entirely correct. Kushner sought $100 million in kickbacks from Israel after securing them $38 billion in foreign aid from the US.”

“The Abraham Accords consisted of bribing Arab kings to normalize relations with Israel by offering them billions of US taxpayer dollars and high-tech weaponry to oppress their own populations.”

“WHAT IF I HAD 10% OF KARLIE KLOSS UNDERWEAR LINE WITHOUT YOU KNOWING,” West wrote, adding, “AND YOU ONLY HAD 5%.”

In the same post, Kanye also said, “JARED WAS HOLDING TRUMP BACK.”

The latter message is a sentiment held by many Trump supporters, namely that Jared Kushner was a globalist plant within the administration.

As we previously highlighted, Jared Kushner recently criticized Ron DeSantis over the Florida Governor’s migrant flights to to Martha’s Vineyard, claiming he was ‘troubled’ by the situation.

“I personally watch what’s happening, and it’s very hard to see at the southern border, I also—we have to remember that these are human beings, they’re people, so seeing them being used as political pawns one way or the other is very troubling to me,” said Kushner.

However, he didn’t have much criticism for Joe Biden for using migrants as political pawns to flood America, 4.9 million of whom have crossed the border since he came to power, paving the way for demographic changes that will permanently alter the country.

Jared Kushner criticizes Desantis’s flight of migrants to MV: “We have to remember that these are human beings, they’re people, so seeing them being used as political pawns is very troubling to me.” pic.twitter.com/zVCWxMUeES 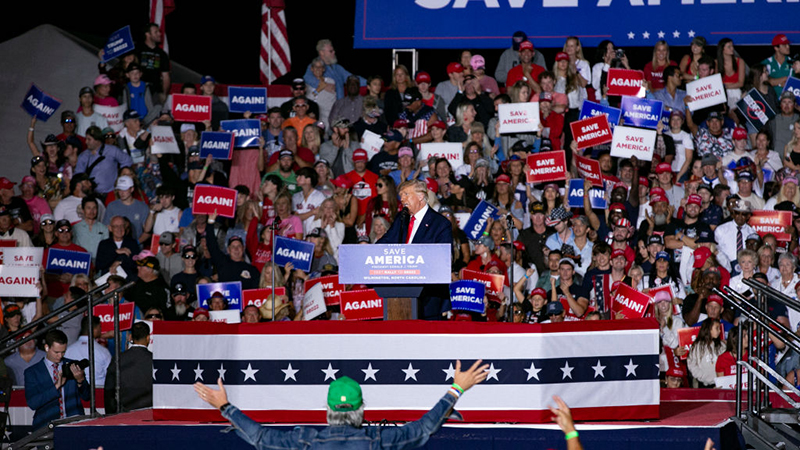