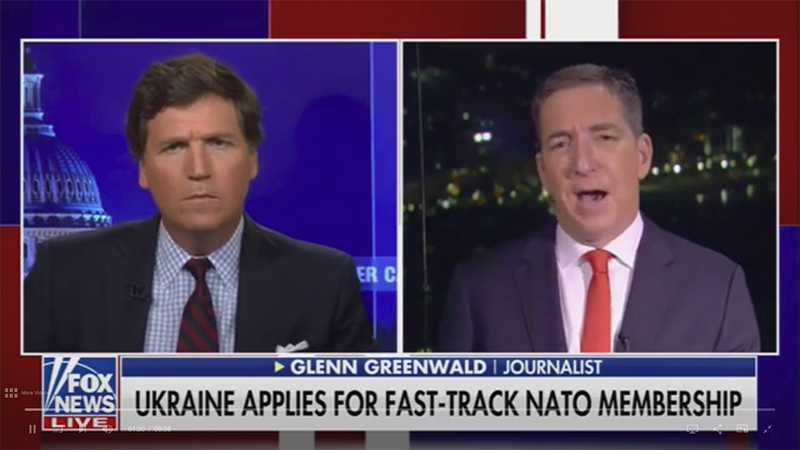 Journalist Glenn Greenwald noted Monday that talks to deescalate or end the conflict in Ukraine are virtually nonexistent because the legacy media and political elites have nurtured an atmosphere where to do so is considered ‘unpatriotic’.

Speaking to Tucker Carlson, Greenwald stated “There is a very real threat of a nuclear exchange, or even a direct confrontation with Russia and the United States. And over what? Over who governs and rules, not even Ukraine, but the Donbas, the eastern region in Ukraine, where a majority of people actually identify as ethnic Russians and want to be part of Russia.”

Greenwald continued, “Yet there’s almost no debate about whether we should be sending huge amounts of money there and risking the lives of American citizens through the possibility of a nuclear war.”

“Because everyone knows that the minute you step up and step out of line, there’s a hoard of people ready to call you unpatriotic, or a traitor, or an admirer of Vladimir Putin, as I know is being done with our very segment right this minute by all those Media Matter people and all those other people online,” the journalist continued.

“It’s a really repressive atmosphere and squashing a debate that we absolutely have to have,” Greenwald further urged.

Greenwald and Carlson also warned that it is foolish not to take Putin at his word that he is willing to deploy Russia’s nuclear arsenal.

“It seems to me, no matter how you feel about Putin, or Ukraine, or the war, or anything, the threat, the very real in-your-face threat of a nuclear exchange right now that they’re openly talking about would require the media to start telling people, hey, this is real, but nobody is. I wonder why that is,” Carlson posited.

Greenwald responded, “I think there’s almost this sense purposely cultivated to believe that the use of nuclear weapons really isn’t a realistic possibility.”

He continued, “It is madness to assume that for Russia, what is an existential war, if they actually start losing it, or NATO really starts escalating as we’ve been doing, that the chances of Vladimir Putin using nuclear weapons is zero. This is a dangerous delusion that I think a lot of people are operating under.”

Carlson also note that “if you ignore the possibility that your entire population could be killed, you are not fit for leadership, because you’re insane. And it feels like our leaders are right there. They’re insane.”

Greenwald’s analysis dovetails with Tesla CEO Elon Musk being attacked, even by Ukrainian ‘diplomats’, for calling for peace talks: