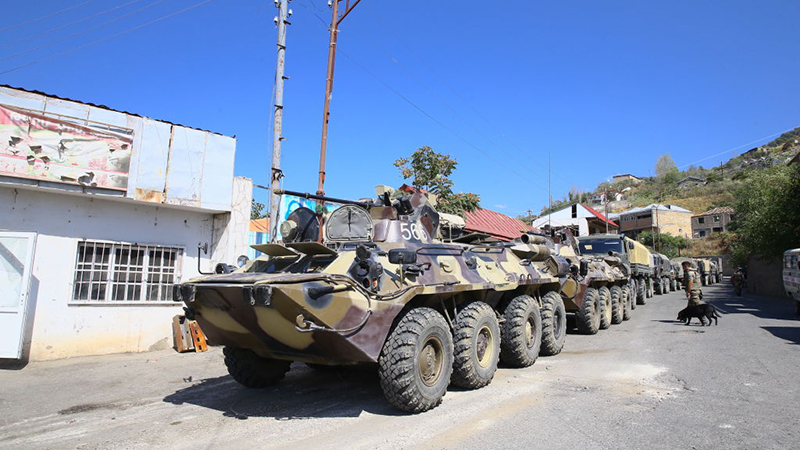 Update (2305ET): The overnight outbreak of fighting in multiple spots along the Armenian-Azerbaijan border is serious enough for Yerevan to have asked for its powerful ally Russia’s help.

This has been revealed hours after Armenian Prime Minister Nikol Pashinyan held a late night telephone conversation with President Vladimir Putin. The Armenian government has since confirmed it has requested Russian military assistance to repel Azerbaijan aggression and shelling, according to a statement (machine translation):

“During the meeting, further steps were discussed to counter the aggressive actions of Azerbaijan against the sovereign territory of Armenia that began at midnight. In connection with the aggression against the sovereign territory of the Republic of Armenia, it was decided to officially appeal to the Russian Federation in order to implement the provisions of the Treaty of Friendship, Cooperation and Mutual Assistance, as well as to the Collective Security Treaty Organization and the UN Security Council.

Armenia is basing the request on the Collective Security Treaty Organization pact it has with Russia, and under which Russia previously sent peacekeeping forces to Nagorno-Karabakh after the Fall 2020 conflict.

Independent geopolitical analyst and Russia watcher Clint Ehrlich concludes of the hugely significant request at a time the Ukraine war is raging: “If Russia accepts, we could see a second NATO-Russia proxy war explode.”

Of the earlier in the night Putin phone call, the Kremlin said via TASS:

“The Prime Minister gave details about the provocative, aggressive actions of the Azerbaijani Armed Forces in the direction of the sovereign territory of Armenia, which began at midnight and were accompanied by shelling from artillery and large-caliber firearms. The Prime Minister considered the actions of the Azerbaijani side unacceptable and stressed the importance of an adequate response from the international community.”

However, it should be noted that during the last major flare-up in fighting between the two longtime rival nations which share a restive border, Moscow was careful to not get too deeply drawn in – only agreeing to help broker a ceasefire and send several hundred Russian peacekeeping forces to oversee the terms of the agreement.

If Moscow does get pulled in, it might be seen in the West as an opportunity to “weaken” Russian forces on a separate front.

Some US Congressional leaders have meanwhile spoken out and stood firmly on the side of Armenia, citing unprovoked Azerbaijan aggression.

Heavy fighting has broken out between Armenia and Azerbaijan along the border shortly after midnight local time, with the ministry of defenses for both countries citing clashes at several locations. Armenia is saying its territory is coming under attack, and that intensive shelling is currently targeting Goris, Sotk and Jermuk in the east.

Crucially there are reports of exchanges of fire beyond far beyond the contested Nagorno-Karabakh region, but shelling on Armenia proper. “Azerbaijani Armed Forces have launched military offensive against Armenian positions in Armenia proper,” writes one regional correspondent.

It appears the fighting has already been sustained for two hours, suggesting this could be the beginning of a broader full-scale war as tensions have simmered going back to the last war for Nagorno-Karabakh in September through November 2020.

Arman Torosyan, spokesman for Armenia’s Defense Ministry has confirmed that “intense skirmishes are continuing following Azerbaijan’s large-scale provocation along the Armenia-Azerbaijan border.” Both sides are now charging the other with aggression and provocations.

The Jerusalem Post is additionally reporting that “large clashes broke out between Armenia and Azerbaijan forces along the border between the two countries on Monday night, according to Azerbaijani and Armenian Defense Ministries.”

Below is the full Azerbaijan defense ministry statement:

Contesting these Azerbaijan accusations of a “sabotage” operation which were alleged to have kicked off the fresh hostilities, Armenia’s military countered with the following official statement:

Complicating matters, there are still several hundred Russian peacekeeping troops in the restive Nagorno-Karabakh border region, as part of the settlement from the last round of fighting centered there.

This peacekeeping mission is now in doubt, and Russia’s major base in Armenia territory is said to be on “high alert”.