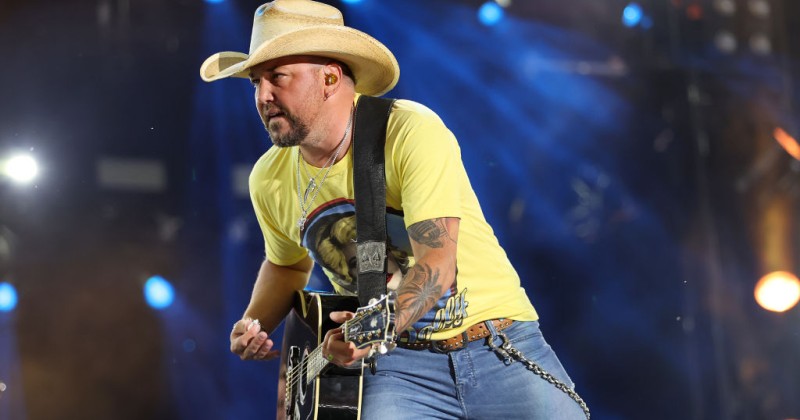 A PR firm severed ties with country music singer Jason Aldean after his wife decried the “genital mutilation of children.”

Brittany Aldean committed the unpardonable sin of criticizing gender transformation surgery for kids in a series of Instagram posts.

“Advocating for the genital mutilation of children under the disguise of love and calling it ‘gender affirming care’ is one of the worst evils,” wrote Aldean. 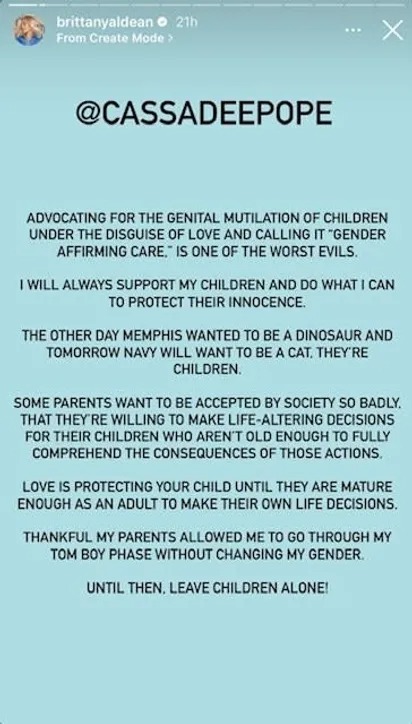 In another post, Aldean spoke about how she went through a “tomboy phase” and was thankful that her parents didn’t opt to change her gender. 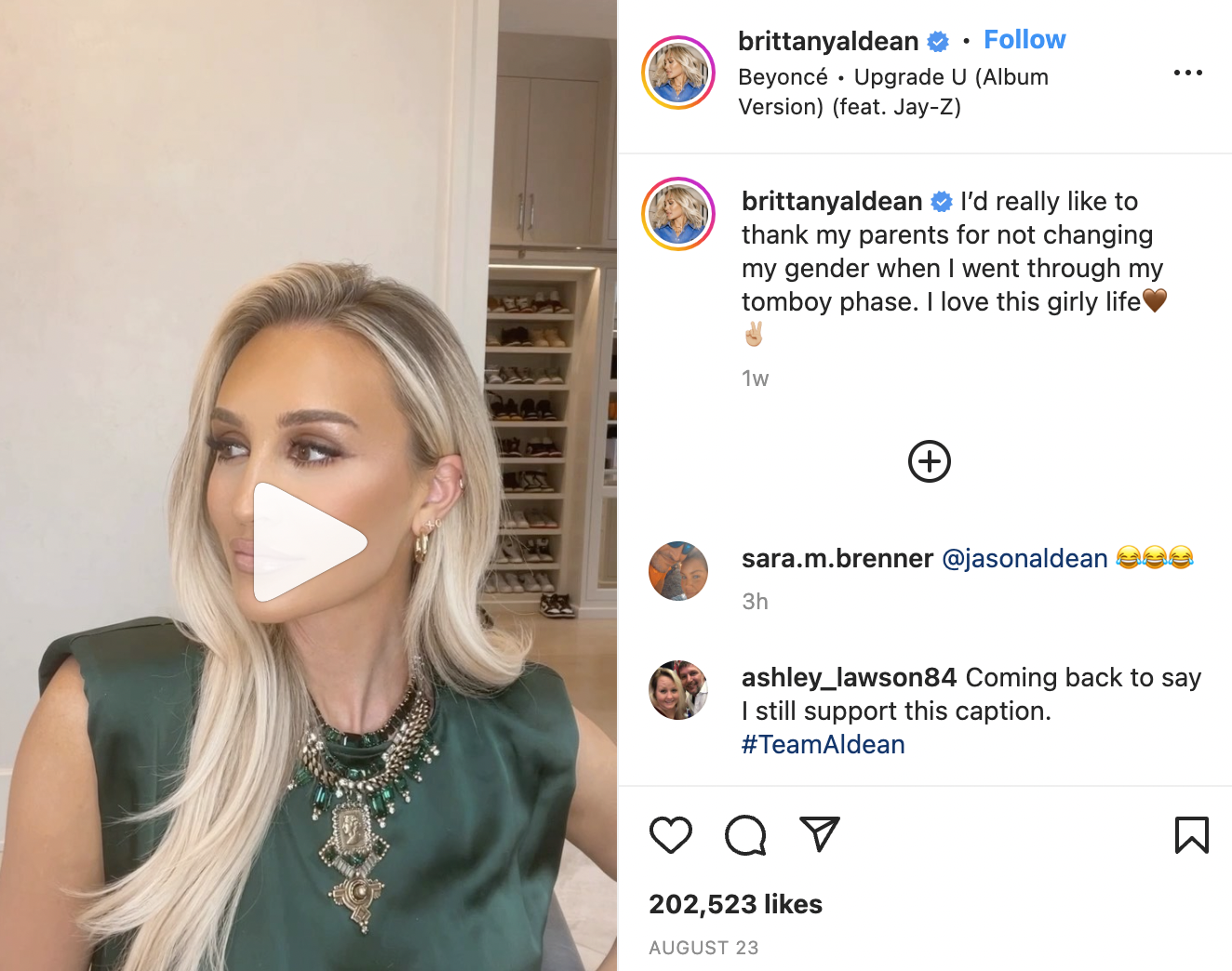 “Amid the controversy, on Friday, The GreenRoom, a Nashville-based PR firm representing many of the top country musicians, announced that it had cut ties with Jason,” reports Reclaim the Net.

An even more cowardly aspect of the PR firm’s behavior is the fact that they refused to specify why they had dropped the country music star, despite his wife’s Instagram posts being the obvious reason.

“Music has always been and remains The GreenRoom’s core focus, so we had to make the difficult decision after 17 years to step away from representing Jason,” the company’s co-founder Tyne Parrish told Billboard.

“We aren’t the best people for the gig anymore but will always be big fans of his music — he is one of the greatest live entertainers in country music,” the statement added.

His wife Brittany defended her social media posts during an appearance on Fox News.

“I’m advocating for children. I think that children should not be allowed to make these life-changing decisions at such a young age. They are not mature enough. They should have parents that love them and advocate for them regardless. We have ages on everything, right? We have it for cigarettes, we have it for driving, we have it for military, voting…Yet for some reason, people think that we can let a child choose their gender so young? It’s very baffling to me,” she said.

Apparently, opposing children having their genitals mutilated is now grounds for career cancellation.

Doesn’t take much these days, does it? 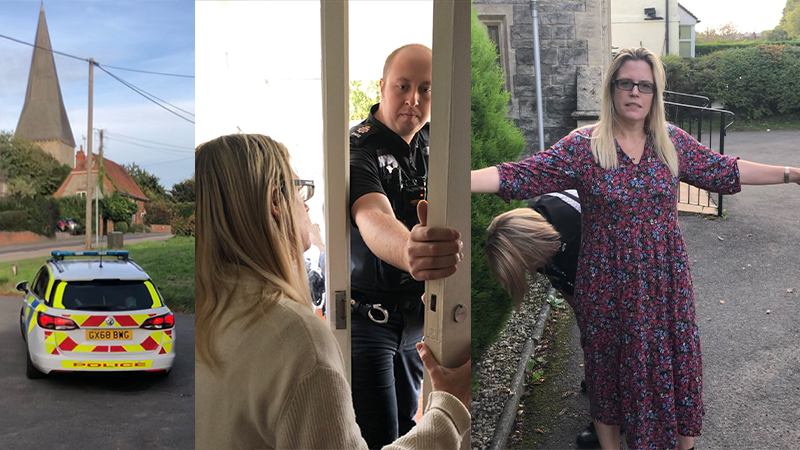 A mother of five in the UK is making headlines after police arrested her in front of her children and apparently seized her computer following alleged ‘offensive’ online posts concerning transgender issues.

The Daily Mail reports the claims of ‘Catholic feminist campaigner’ Caroline Farrow who says she was detained for the alleged posts and memes shared on the online forum KiwiFarms.

Farrow, who has had previous run ins with the Surrey police over the same issue, says that officers forced their way into her house and took away all her devices, including an iPad she uses to homeschool her children.

Farrow says she isn’t behind the posts that someone reported to police as ‘offensive’:

She posted images of police entering her house to arrest her:

In an interview with GB News, Farrow who has been released pending investigation asserted “I have been arrested for what was a twitter spat about gender issues.”

Farrow has asserted that trans activists are using police to harass those who do not agree with their ideology, a stance she has been public about for some time now.

Police released a statement addressing the case after public backlash following media reports, in which they claimed it is their duty to investigate a report of a “grossly offensive message,” and “assess it alongside any available evidence to identify if an offense has been committed.”

“We do not have the freedom of detailing every stage of our inquiries or the specifics of an allegation on social media as it is critical we do not pre-empt or prejudice any future proceedings at any stage,” the statement adds.

While Farrow’s case is clearly an ongoing battle between her organisation and trans activists, many non-affiliated people in the UK have chimed in to relate how they have been harassed by police over ‘offensive’ social media posts.

The Mail notes that Farrow was previously investigated by police concerning allegations she misgendered a trans daughter of the head of the transgender charity Mermaids and accused the organization of promoting child abuse.

The latest developments have brought further scrutiny on the charity:

Library claims it is being “defunded” by conservative parents 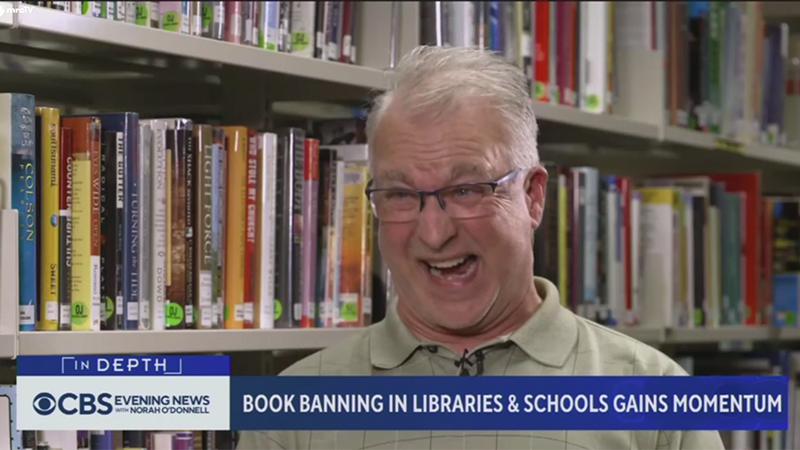 CBS Evening News ran a report Wednesday lamenting the fact that various controversial LGBTQ themed books have been removed from a school library in Jamestown, Michigan after parents complained that the material was pornographic.

The piece framed the development, which is occurring in schools nationwide, in the context of a “sharp rise in book bans in America’s schools and libraries”.

Correspondent Elaine Quijano noted that a group of parents called the Jamestown Conservatives have “led a successful drive to essentially defund the library.”

“They want those books removed from the shelves,” Quijano further complained.

The report also contained an interview with the library board president, who repeated the “defunded” pejorative and whined “I feel like we’ve kind of stepped back in time, talking about book banning.”

As we have repeatedly highlighted, the children’s books in question contain graphic depictions of oral sex between gay men, as well as a host of other material that is objectively unsuitable for children.

Parents nation-wide have found themselves under attack by leftists and even government entities over recent months after taking on school officials.

“Puberty blockers are safe and can give you more time to figure out what feels right for you, your body, and your gender identity” 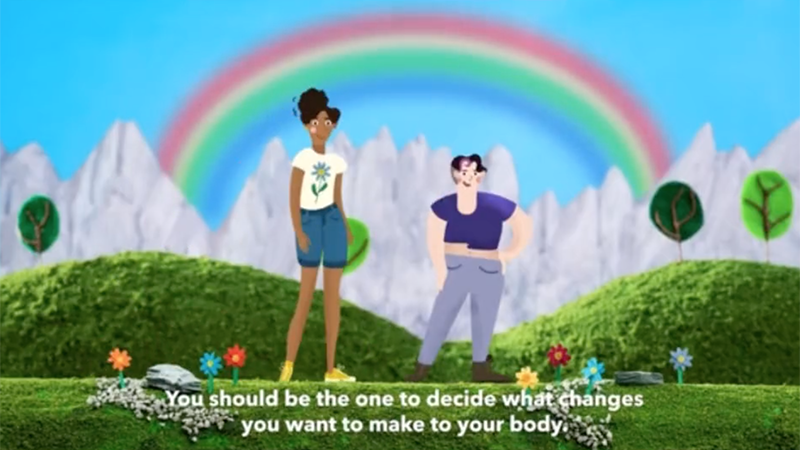 Not content with staying in its lane as abortion champions, Planned Parenthood has produced a cartoon, aimed at children, promoting the virtues of puberty blocking pharmaceutical drugs.

The video was shared to Twitter by Inside the classroom, a conservative group that has previously focused on exposing efforts to indoctrinate school children with critical race theory.

“There is no one size fits all puberty experience,” the video claims, adding “Some people decide on hormones or surgeries to help their bodies match up to their gender identities or how they feel inside about themselves.”

It continues, “Your gender identity is real. You should be the one to decide what changes you want to make to your body.”

“If you’re transgender or nonbinary, you may find that your puberty experiences don’t line up with your gender identity. That feeling can be uncomfortable, scary, and stressful. If that sounds like you, know that you’re not alone,” the video further claims before launching into a push for ‘safe’ puberty blocking drugs.

“There are medicines you can take to delay puberty for awhile,” the video further proclaims, adding “they work like a stop sign, by holding the hormones testosterone and estrogen that cause puberty changes like facial hair growth and periods.”

“Puberty blockers are safe and can give you more time to figure out what feels right for you, your body, and your gender identity,” the video declares, without providing any detailed facts.

There is little long term research on the effects of puberty blockers, and according to the American College of Pediatricians “There is not a single long-term study to demonstrate the safety or efficacy of puberty blockers, cross-sex hormones and surgeries for transgender-believing youth.”

In the short term, the drugs have been linked to depression and a worsening of confusion, as well as other mental and emotional problems.

The Family Research Council notes that studies have concluded the drugs do nothing to solve gender confusion, which is a natural state of mind that the vast majority of children eventually outgrow.

But the 2 minute cartoon says they’re safe, so lets go with that.

If they can’t mutilate babies in the womb, they’ll mutilate your teenagers instead.

Did anyone actually believe that @PPFA wouldn’t stoop to the deepest depths of hell to make up their losses after we aborted Roe?

The Biden administration, with its transgender Assistant Health Secretary is pushing puberty blockers and working to “empower” children to get sex change surgery.

Meanwhile, those who oppose lopping off the breasts and genitals of teenagers, and have chosen to speak out against it, are being vilified and facing calls to be prosecuted by the Justice Department.