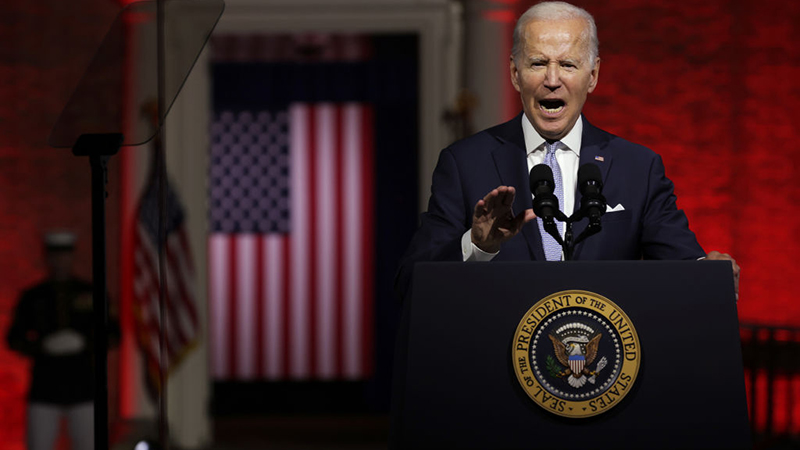 As we highlighted earlier, Joe Biden delivered an address Thursday night in front of a blood red set that looked like he was literally in hell, flanked by marines, while clenching his fists and yelling about all Americans who disagree with him being violent extremists who “thrive on chaos” in a ‘battle for the soul of America’.

But that wasn’t enough for some of his supporters.

Disgraced former FBI Deputy Director Andrew McCabe, who obsessed over investigating non existent ‘Russian collusion’, appeared on CNN and suggested that Biden should have gone further during the speech.

“People would like to have seen a bit more references to accountability. There really wasn’t much talk about what we’re doing about those insurrectionists,” McCabe proclaimed.

What exactly is McCabe suggesting? Perhaps Public executions of Trump supporters to send a message?

Elsewhere during CNN programming, Don Lemon laughably stated that Biden’s speech was a great example of how he is unifying the nation.

“Can the unifying message be that some of what he’s saying is true because… a lot of folks would go, where’s the lie? I don’t see no lies detective,” Lemon declared.

The guy just yelled that anyone who disagrees with him is a violent extremist who threatens the foundation of the country, and somehow that is unifying?

The network went on to laud Biden’s “full frontal attack” asserting that he is “reclaiming patriotism.”

Reporter Eva McKend declared that “Often you hear Republicans argue that they are the pro-America party. Right? The Democrats are not patriotic enough. But what was more pro-USA than this speech?”

“It was a very, very patriotic speech and I think that that is a lot of what Democratic voters across the country, they want to be patriotic too,” she added.

While the left drooled over Biden’s dictator optics, some so called ‘MAGA extremists’ pointed out that it’s an image he has been long living up to.

“This was his enemies of the state speech,” miller continued, adding “like every other radical, Marxist, tyrant, he accused his opponents of being fascist while he engages in oppressive authoritarian behavior.”

“He’s the one who’s forcing Americans against their will to take a vaccine,” Miller continued.

“He is the one who has violated our nation’s Constitution to open our borders,” he added.

“He’s the one who is interfering in the sacred relationship between parent and child to try to force dangerous medicine, puberty blockers, hormones, on our little kids.”

“He’s the one whose government raided the home of his chief political opponent. in a fashion that violates the entire constitutional order because President Trump has the absolute right to decide what is or isn’t in the national security interest when he leaves the White House.”

“All of those things, all of them, are the behavior of a tyrant,” Miller warned.

Meanwhile, Tucker Carlson warned that Biden has “lost all sense of proportion and restraint,” adding that when Americans opposed to the establishment’s agenda are declared to be ‘fascist extremists’ “there is no limit to what they can do to you and feel morally justified as they do it.”

Video: WH Press Secretary Declares ‘If You Disagree With The Majority That Is EXTREME THINKING’

Blood Red Biden: Trump Supporters “Represent An Extremism That Threatens The Very Foundations Of Our Republic”