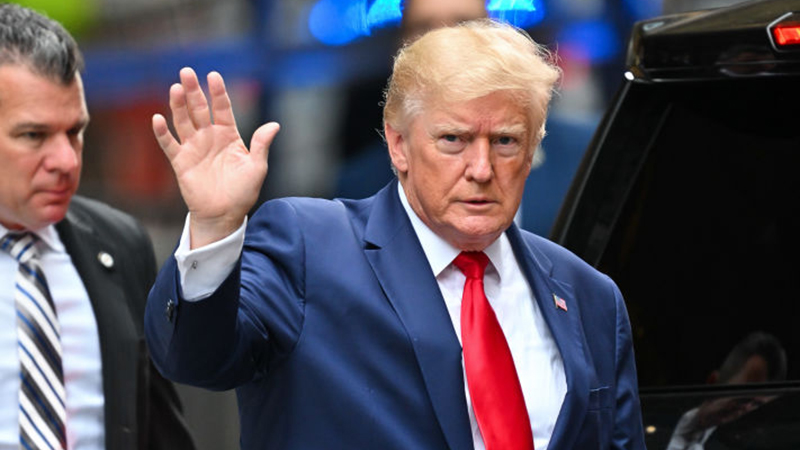 Update (1537ET): Politico reports that based on the search warrant, the FBI is investigating former President Trump for “removal or destruction of records, obstruction of an investigation, and violating the Espionage Act,” while Breitbart has the actual statutes from the warrant.

The documents, which are expected to be unsealed later Friday after the Justice Department sought their public disclosure amid relentless attacks by Trump and his GOP allies, underscore the extraordinary national security threat that federal investigators believed the missing documents presented. The concern grew so acute that Attorney General Merrick Garland approved the unprecedented search of Trump’s estate last week.

Taylor Budowich, a spokesperson for Trump, said the FBI’s move was “not just unprecedented, but unnecessary — and now they are leaking lies and innuendos to try to explain away the weaponization of government against their dominant political opponent. This is outrageous.” -Politico

Sen. Lindsey Graham (R-SC) has called for AG Merrick Garland to release the information which predicated the warrant.

According to Human Events‘ Jack Posobiec:

The warrant did not include a call to search parts of the property that are in use by members of the Mar-a-Lago club, or rentals.

It further reads that the “Property to be seized” includes “All physical documents and records constituting evidence, contraband, fruits of crime or other items illegally possessed in violation” of legal codes, including:

“Information, including communications in any form, regarding the retrieval, storage, or transmission of national defense information or classified material;

“Any government and/or Presidential Records created between January 20, 2017,” the day Trump took office, and the end of his term.

Additionally, the warrant demands the seizure of “Any evidence of the knowing alteration, destruction, or concealment of and government and/or Presidential Records, or of any documents with classification markings.”

A receipt of property for dozens of boxes follows, with that receipt signed by Trump attorney Christina Bobb on August 8, at 6:19 pm.

The reason for the search warrant was not made public, and the probable cause is not noted as part of the documents.

Update (1512ET): President Trump had more to say on Friday about Monday’s FBI raid on his residence at Mar-a-Lago.

“Number one, it was all declassified. Number two, they didn’t need to “seize” anything. They could have had it anytime they wanted without playing politics and breaking into Mar-a-Lago. It was in secured storage, with an additional lock put on as per their request,” Trump wrote on Truth Social.

“They could have had it anytime they wanted—and that includes LONG ago. ALL THEY HAD TO DO WAS ASK. The bigger problem is, what are they going to do with the 33 million pages of documents, many of which are classified, that President Obama took to Chicago?”

C. Did they look in June?  If so, didn’t they see the documents?  If they did not look, why not?

D. 2. If the FBI felt the Trump lawyers were not cooperative, all they had to do is go to court to enforce their subpoena or get a second subpoena.

F. 3. Once again, I make the argument that this was pretextual for the purpose of grabbing anything they could find, using the plain view doctrine as an attempt to find anything related to January 6, among other things.

Update (1325ET): The DOJ leak-fest continues, this time with the Wall Street Journal reporting that the FBI “removed 11 sets of classified documents, including some marked as top secret and meant to only be available in special government facilities” (much like the 7 ‘top secret’ email chains on Hillary Clinton’s computer).

The Federal Bureau of Investigation agents took around 20 boxes of items, binders of photos, a handwritten note and the executive grant of clemency for Mr. Trump’s ally Roger Stone, a list of items removed from the property shows. Also included in the list was information about the “President of France,” according to the three-page list. The list is contained in a seven-page document that also includes the warrant to search the premises which was granted by a federal magistrate judge in Florida. -WSJ

One set of the recovered documents were marked as “Various classified/TS/SCI documents,” referring to sensitive or top-secret information.

According to the Journal‘s subheadline, Trump allies insist the documents were declassified by the former president.

The search and seizure warrant, signed by U.S. Magistrate Judge Bruce Reinhart, shows that FBI agents sought to search “the 45 Office,” as well as “all storage rooms and all other rooms or areas within the premises used or available to be used by [the former president] and his staff and in which boxes or documents could be stored, including all structures or buildings on the estate.”

The former president and his team don’t have the affidavit, which would provide more detail about the FBI’s investigation, according to people familiar with the process. His lawyers have asked for a more specific account of what was removed from Mar-a-Lago. -WSJ

Meanwhile, guess who didn’t get raided for doing the same thing?

On Friday, Trump called out former President Barack Hussein Obama for keeping “33 million pages of documents, much of them classified.”

A debate over whether Trump could have declassified the documents has ensued:

Former President Donald Trump on Friday called a Thursday report in WaPo that he took classified documents related to nuclear weapons “a hoax,” and compared it to the FBI’s use of the discredited ‘Steele Dossier’ – a notorious fabrication used during and after the 2016 US election to discredit Trump as a Russian asset.

“Why wouldn’t the FBI allow the inspection of areas at Mar-a-Lago with our lawyer’s [sic], or others present. Made them wait outside in the heat, wouldn’t let them get even close — said ‘ABSOLUTELY NOT.”

“Planting information anyone? Reminds me of a Christofer Steele Dossier!”

On Thursday, Trump demanded the “immediate release” of materials related to the FBI raid on his Mar-a-Lago residence.

Meanwhile, Twitter is full of hot takes and reactions…