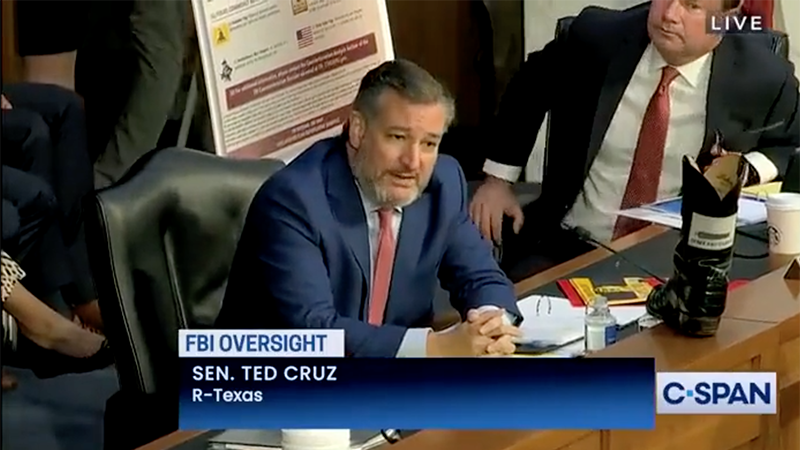 Wray claimed he had no knowledge of the document which Project Veritas revealed cites symbols, phrases, images, events, and individuals that agents should flag when trying to identify potential “Militia Violent Extremists” (MVEs).

Cruz told Wray that the revelations are one example of how the FBI has been “weaponized and politicized” to label everyday Americans as “Anti-Government or Anti-Authority Violent Extremists.”

“I will self-report right now that every day in the Senate I wear my boots that have the Gonzalez battle flag on the back of em,” Cruz said while slamming his boot on the counter and adding “What are y’all doing? This makes no sense.”

Cruz also noted that the Gadsden Flag is a symbol currently used on Virginia license plates.

Elsewhere during the hearing, Cruz got Wray to admit that the Detroit FBI Special Agent who oversaw the “absolute debacle” that was the Gretchen Whitmer kidnapping entrapment scheme is now in charge of the Washington, D.C. Office, overseeing the J6 investigation.

Wray also came under questioning from GOP Senator Josh Hawley, who cited a whistleblower report detailing that the Biden Administration had evacuated hundreds of people from Afghanistan who were on the Pentagon’s “watch list,” including known, suspected terrorists, and resettled them in the U.S.

The whistleblower told Hawley and Senator Ron Johnson that the White House and the DoD ordered corners to be cut, data to be deleted and did not properly vet the refugees.

Wray stated that the FBI is trying to investigate, but he has no information as to the status of any of the cases.

“I can’t sit here right now and say we know where all are located at any given time,” Wray stated.

“We know that hundreds of people potentially connected to terrorism are loose in this country” owing to these actions, Hawley said.

Wray also warned that “Al-Qaeda maintains its desire to both conduct and inspire large-scale, spectacular attacks”.

This comes at a time when the White House Coordinator for Strategic Communications at the National Security Council admits that Al Qaeda is now using Afghanistan as a “safe haven” again:

How about them scary Gonzalez battle flags though?

Exclusive: The Truth About the Alex Jones Phone Records