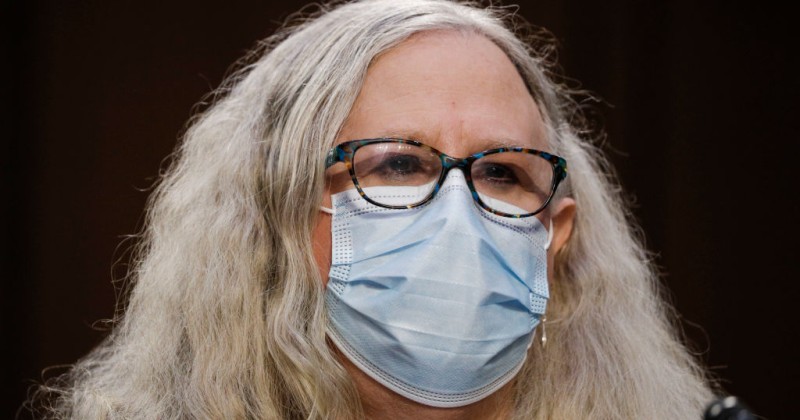 Transgender Assistant Health Secretary Admiral Rachel Levine has announced that the Biden administration is working to “empower” children to get puberty blockers and sex change surgery.

Levine made the comments during an appearance on MSNBC.

“We really want to base our treatment and to affirm and to support and empower these youth — not to limit their participation in activities in sports and even limit their ability to get gender affirmation treatment in their state,” said Levine.

Biden Assistant Secretary for Health Rachel Levine: We need to “empower” kids to go on puberty blockers and get sex reassignment surgery. pic.twitter.com/CRPRaFYtzK

The remarks were made in response to a Biden policy allowing transgender workers and students to use bathrooms of the opposite sex in schools and compete in sports competitions against the opposite sex.

One respondent to Levine’s comments made clear what the assistant health secretary was actually calling for.

“Biden’s AssIstant HEALTH Secretary thinks we should sterilize children (many of whom are autistic), cut off the breasts of 13-year-old girls, destroy kids’ future sexual function, reduce their bone density causing osteoporosis, and send teenaged girls into menopause.”

Biden’s AssIstant HEALTH Secretary thinks we should sterilize children (many of whom are autistic), cut off the breasts of 13-year-old girls, destroy kids’ future sexual function, reduce their bone density causing osteoporosis, and send teenaged girls into menopause.

The Biden administration has made forcing the ghoulish transgender ideology on kids part of its barbaric social engineering agenda.

Back in April, the White House claimed that sex change surgeries for children are “life saving,” despite suicide rates amongst post-op transgenders being even higher than before, while threatening to weaponize the Department of Justice against states that tried to stop them.

Former White House Press Secretary Jen Psaki even publicly broke down in tears at the thought of children not being able to have their genitals mutilated until they’re adults.

The president himself also assured parents of children identifying as transgender that “affirming your child’s identity is one of the most powerful things you can do to keep them safe.”

To transgender Americans of all ages, I want you to know that you are so brave. You belong. I have your back. pic.twitter.com/mD4F0m3rU1