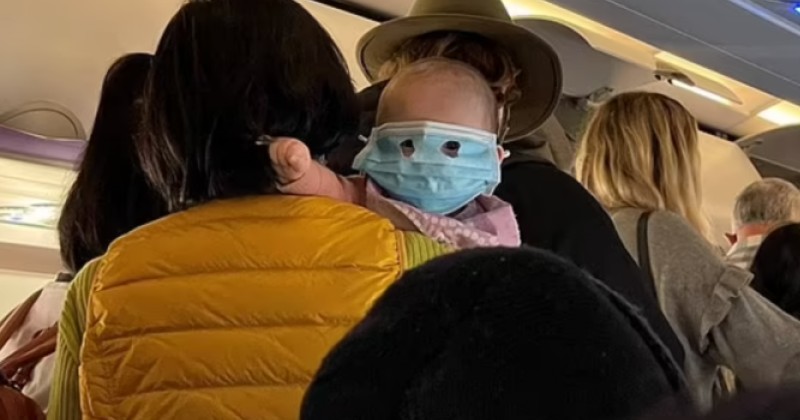 The man who took a disturbing photograph of a baby on a plane with its entire face smothered by a mask dubiously claimed the infant was “full of joy.”

Some people were shocked by the image, describing the parents’ treatment of the infant as “child abuse.”

However, others praised them for ‘protecting the baby from COVID’ despite the infinitesimal chance of the virus claiming her life.

After the picture went viral, Jandre Opperman, the man who captured the image on an Air New Zealand flight from Auckland to Wellington on July 1st claimed there was nothing sinister about what was a “super-sweet interaction.”

“The baby was full of joy, jumping around and giggling away. It made the wait to get off the plane a bit more entertaining,” he said.

However, people quoted by the Daily Mail newspaper weren’t convinced by the explanation.

“If I saw this on a flight I’d remove the mask from her myself,” said one.

Another asserted that it was “dangerous to cover their breathing holes like this.”

Opperman defended the mother, claiming the mask wasn’t tight on the baby’s face, stating, “I think it was a mix of having a laugh, and trying her best to protect her child with the equipment available to her.”

As we highlighted last month, another study set to be published by the Times newspaper found that thanks to social isolation caused by lockdown, many children entering elementary school are unable to say their own name.

We previously reported on the case of a pediatrician who attracted controversy for Twitter posts in which he revealed how he makes his baby wear face masks and uses an air filter contraption attached to a pram to ‘protect’ against COVID-19.

China Suggests it Could Maintain ‘Zero COVID’ Policy For 5 Years