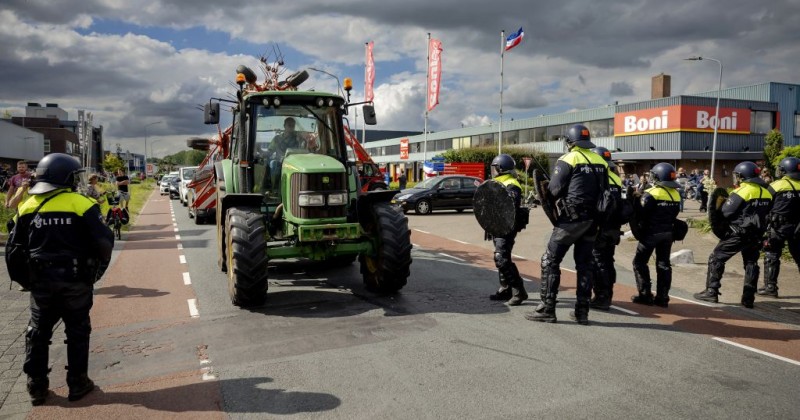 An official investigation is underway after Dutch police fired live shots at anti-green agenda protesters in the Netherlands.

The country has seen multiple unruly demonstrations across the nation in response to the government’s plan to cut nitrogen emissions by up to 95% by 2030.

Farmers say the policy will lead to at least 30% of Dutch farms being put out of business as they’re forced to cut the number of livestock by the same figure.

Anger has intensified after the government revealed the same nitrogen cuts, being proposed in the name of fighting climate change, won’t be applied to the airline industry.

The incident unfolded last night during a confrontation which took place in the northern town of Heerenveen.

Video footage shows officers shooting at a tractor which they claimed was trying to evade law enforcement.

The tractor was hit and the three suspects were arrested, with no injuries having occurred.

Video of the incident does not show the tractor attempting to “drive into officers.”

One of the suspects shot at by police was a 16-year-old boy.

The National Criminal Investigation Department has launched an official inquiry into the incident.

So, uh…. Dutch farmers have purchased a tank to use to block distribution centres. pic.twitter.com/rVvwb2pSA9

Farmers have also purchased a tank which they are using to blockade distribution centers as a reminder to the public about what will happen if food supplies are drastically impacted by globalist climate change policies.

Police are violently pulling down blockades one by one, through the use of "Romeos" which I'll talk about later. (Basically police sanctioned ANTIFA). Shocking for a democracy, but this is Klaus Schwab country. Here is a snapshot from the front lines. https://t.co/363xQ3IVwh pic.twitter.com/SdYi5rKj2L

“Fisherman in the country have also begun blocking ports in solidarity with the farmers,” reports Zero Hedge.

Farmers have also protested by pouring manure on government offices and outside the homes of ministers.

Dutch farmers protesting outside the home of the Minister for Nitrogen & Nature Policy against the govts plan to target the livestock sector with nitrogen emission cuts.

The plan could see up to 30% reduction in livestock farming & farms out of business. pic.twitter.com/0C8hjLQJWn

🚨🚨⚠️⚠️
The Dutch protesters are pouring manure on government offices, flooding streets, and becoming all together ungovernable. This uprising is in response to the WEF controlled government shutting down farms to "save the planet." You have to see this: https://t.co/YTyax7uagm pic.twitter.com/mXgufQfkRM

The shooting in Heerenveen is sure to be another flashpoint for further unrest.

Government attempts to impose their green agenda on farmers has led to a rash of suicides, with three farmers killing themselves in the last two weeks alone.

As we document in the video below, agent provocateurs have been caught on camera embedded within protests, presumably in an effort to spy on activist leaders or stage violent stunts.

Video: Bill Gates Says It’s OK For Him To Use Private Jets Because He’s “The Solution” To Climate Change 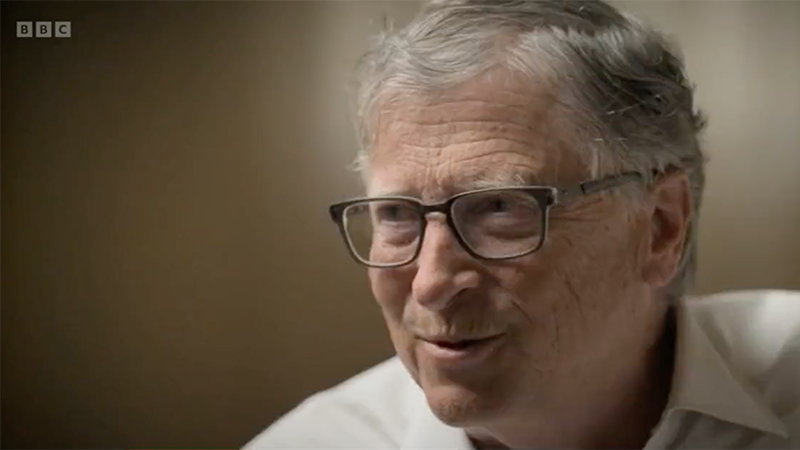 In a cringe inducing interview with a BBC reporter, Bill Gates argued that it’s perfectly fine for him to fly around the world on private jets because he’s doing much more than anyone else to combat climate change.

Gates claimed that because he continues to “spend billions of dollars” on climate change activism, his carbon footprint isn’t an issue.

“Should I stay at home and not come to Kenya and learn about farming and malaria?” Gates said in the interview with Amol Rajan.

“I’m comfortable with the idea that not only am I not part of the problem by paying for the offsets, but also through the billions that my Breakthrough Energy Group is spending, that I’m part of the solution,” Gates added.

Most recently, Gates flew around Australia on board his $70 million dollar luxury private jet lecturing people about climate change.

Gates, who has declared that the energy crisis is a good thing, owns no fewer than FOUR private jets at a combined cost of $194 million dollars.

Gates emitted an estimated 1,760 tons of carbon dioxide emissions, over a hundred times more than the emissions per capita in the United States, according to data from the World Bank.

Elsewhere during the carefully constructed interview, Gates said he was surprised that he was targeted by ‘conspiracy theorists’ for pushing vaccines during the pandemic.

Gates again repeated a talking point about it being more important to mass vaccinate humanity than to travel to Mars.

While the BBC interview was set up to look like Gates was being challenged or grilled, he wasn’t asked about being pally with deceased elitist pedophile Jeffrey Epstein.