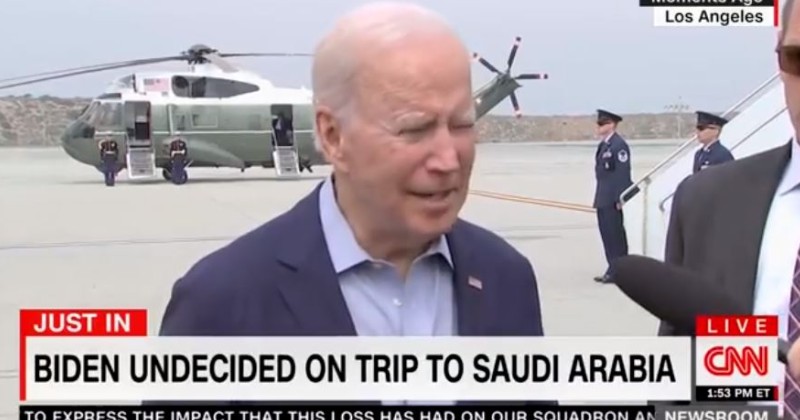 Joe Biden was caught in yet another embarrassing verbal brain freeze before boarding Air Force One, appearing confused as to whether or not he was visiting Saudi Arabia.

The exchange began on the tarmac at Los Angeles when Biden responded to a question from a reporter who asked if he had decided to visit Saudi Arabia to plead for more oil.

However, within seconds, Biden was forced to correct himself after he was asked if there were any “commitments from the Saudi’s” he was waiting on.

Joe Biden says he hasn't decided whether to visit Saudi Arabia, who he previously called "a pariah," to beg for more oil.

20 seconds later, he says, "It happens to be a larger meeting taking place in Saudi Arabia. That's the reason I'm going." pic.twitter.com/K4bK6eAZAV

“He is boarding the plane and he doesn’t know where he is going,” said one.

“Grandpa not having his best day,” added another.

Elsewhere, it was reported that Democrats are panicking at the thought of Biden once again going up against Trump for the 2024 presidential election.

“They have watched as a commander in chief who built a reputation for gaffes has repeatedly rattled global diplomacy with unexpected remarks that were later walked back by his White House staff, and as he has sat for fewer interviews than any of his recent predecessors,” reported the New York Times.