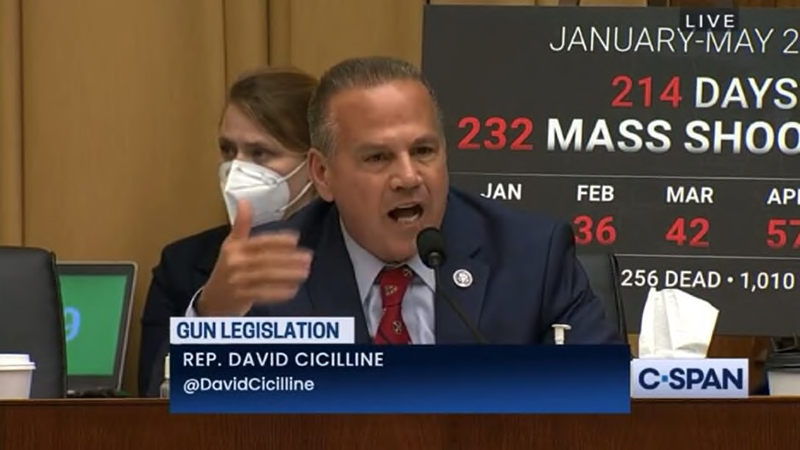 Democratic congressman David Cicilline told House Republicans they should “spare me the bullshit about Constitutional rights,” during a debate on gun control Thursday.

The Rhode Island representative refused to yield his time during the outburst, while discussing legislation related to “red flag” laws, that would allow the government and law enforcement to confiscate firearms from anyone deemed to be a danger to themselves or others.

Florida congressman Matt Gaetz attempted to insert an amendment to the legislation stating “Congress disfavors the enactment of laws that authorize a court to issue an extreme risk protection order, also known as Red Flag laws, in the States because such laws trample on an individual’s due process and Second Amendment rights.”

That prompted Cicilline to call the defense of Americans’ constitutional rights “bullshit”.

Cicilline proclaimed that those who are an “imminent danger to themselves and others, such as they might commit mass murder, have a constitutional right to access a firearm. And to deny them that right would, quote, ‘trample on an individual’s due process and second amendment rights.’”

When Gaetz attempted to respond, Cicilline said “No I will not yield and I’m not going to yield for my entire five minutes, so don’t ask again.”

This tells you everything you need to know about the Democratic attitude to the Second Amendment and the Constitution generally.

The comments came on the same day Joe Biden announced an intention to bring about sweeping gun control measures, including a ban on “assault weapons” and “high capacity” magazines, as well as red flag laws, new laws on background checks and storage, and a vow to “repeal the immunity of gun manufacturers from liability.”

Biden claimed during his speech that he wasn’t taking away anyone’s rights.