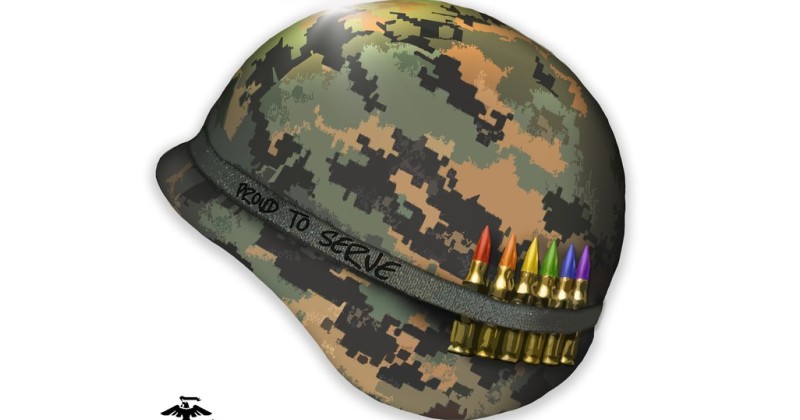 Twitter users reacted with a mixture of head-shaking and ridicule after the official US Marines account tweeted an image of LGBT flag colored bullets, with some pointing out that they had literally fulfilled a satirical meme.

In a tweet to mark the start of Gay Pride Month, the US Marines account tweeted, “Throughout June, the USMC takes #Pride in recognizing and honoring the contributions of our LGBTQ service members. We remain committed to fostering an environment free from discrimination, and defend the values of treating all equally, with dignity and respect..”

The image accompanying the tweet featured 6 bullets in LGBT rainbow colors secured in a military helmet with the words “ready to serve written on it.”

Throughout June, the USMC takes #Pride in recognizing and honoring the contributions of our LGBTQ service members. We remain committed to fostering an environment free from discrimination, and defend the values of treating all equally, with dignity and respect.#PrideMonth #USMC pic.twitter.com/MOyvFmyJiB

Although meant to resemble bullets, the rainbow colors made them look more like lipstick.

Twitter users had a field day in the replies, with many pointing out that the Marines had literally fulfilled the satirical ‘gay bombs’ meme which poked fun at the military-industrial complex appropriating gay pride to legitimize attacking other countries.

Y'all saw this meme and thought "good idea!" pic.twitter.com/FZfXSVMyxk

Others also reacted with revulsion.

Seriously? How does fixating on differences foster cohesion and unity?

Do we only shoot gay bullets now?

Fuck out of here with this. We don't take political sides, and we don't engage in social commentary. We kill the enemy… period.

The month of June is PTSD Awareness month. Suicide has drastically increased in the military and in the veteran community. Our focus is on the mental health of our brothers and sisters not social equity.

This is a disgrace.

Meanwhile, gay vaseline is now available for purchase at double the price of the normal version.

This will surely guarantee that a movement which can count on the support of every major western government, cultural institution, corporation, bank, and legacy media outlet never experiences any form of oppression ever again.

Report: BBC Changed Victim’s Statement So As Not To ‘Misgender’ Her Trans Rapist