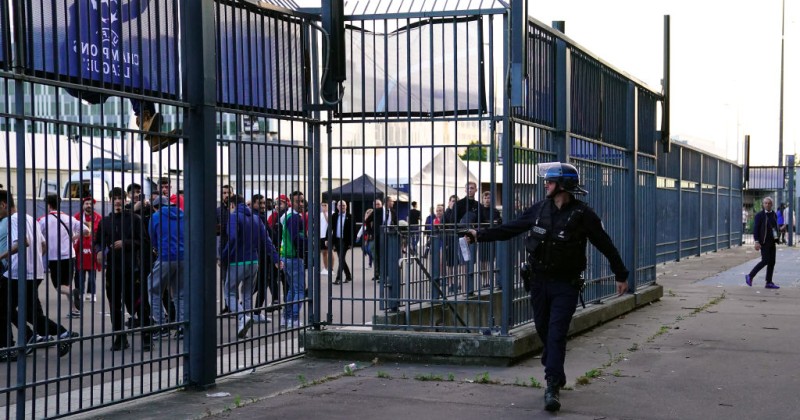 France has been warned that it needs to rethink its approach to security for the 2024 Olympics after the chaos before the Champions League final in Paris, during which migrant youths from the local area targeted football fans with assaults and robberies.

The final had to be delayed after people described as “local youths” stormed stadium security, vaulting fences and entering the ground without tickets as well as carrying out countless robberies and assaults on tourists visiting for the game who they saw as easy prey.

The media falsely blamed Liverpool fans for the chaos, when in reality footage and eyewitness testimony spoke to large numbers of migrants, some from crime gangs, deliberately targeting innocent supporters.

Russia’s second largest city St. Petersburg won the right to host the UEFA final, but it was later moved to the Stade de France in Paris as punishment for the invasion of Ukraine.

The Stade de France is located in the ethnic suburb of Saint-Denis, which is home to a whopping 400,000 illegal immigrants, most of whom are from North Africa and the Middle East.

“At least one thousand thieves, robbers, and bandits assaulted families, threw people to the ground, took everything from them, leaving people outside, unable to attend the game,” said French sports journalist and eyewitness Daniel Riolo.

“They were young people from the suburbs, who were friends with the attackers,” he added.

National Rally leader Marine Le Pen explained how the bedlam, caused by “a horde of criminals who came to loot and assault people,” was an indication of France’s wider problem with millions of unintegrated migrants who are overrepresented in crime and sexual assault statistics.

“The events that took place at the Stade de France are an allegory of all the dangers that weigh on France,” said Le Pen. “Today, we are unable to organize large events keeping them free of violence and abuse.”

French authorities wrongly blamed British fans for the unrest, but they have been warned to rethink security measures in preparation for the 2024 Olympic Games, which will be hosted at the same venue.

“This is a genuine problem and we will have to look at it in depth especially in the light of the Summer Olympic Games coming in two years. What we have seen is a sign of serious governmental dysfunction. We need to master our technique on how to manage the flux of people and deal with fraud tickets’ sales before the Olympics,” said former French lawmaker Jacques Myard.

What Really Happened Before the Champions League Final