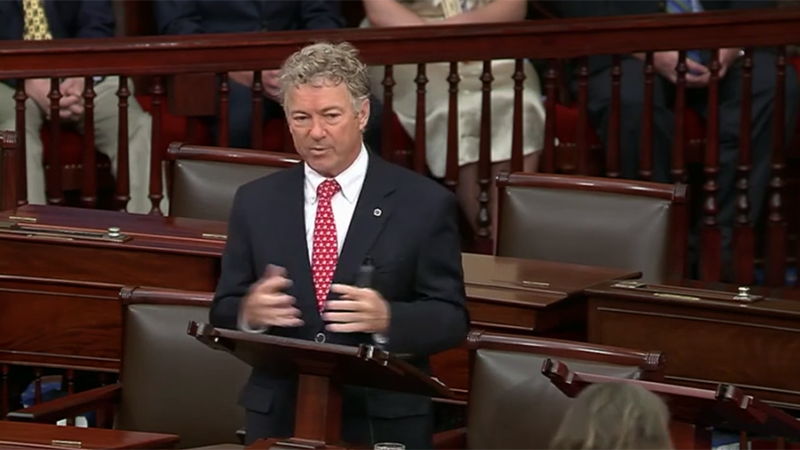 In a speech on the Senate floor Friday, Rand Paul blasted efforts by Democrats to paint up all law enforcement officers and those in the military as dangerous radical racists.

Paul was addressing The Domestic Terrorism Prevention Act of 2022, blocked by Republicans in the Senate, that demands the FBI and Department of Homeland Security change the way they investigate and monitor domestic terrorism suspects.

The official summary of the bill notes that an “interagency task force” would be established in order to probe into “white supremacist and neo-Nazi infiltration of the uniformed services and federal law enforcement agencies.”

“This bill should be called by a more accurate name: the Democrat plan to brand our police and soldiers as white supremacists and neo-Nazis,” Paul proclaimed.

He continued, “How insulting,” adding “We knew that Democrats despise and want to defund the police, but now, they believe that the police, federal law enforcement, and the U.S. military are full of white supremacists and neo-Nazis?”

Referring to the now mothballed ‘Disinformation Governance Board’, Paul also noted “Those of us who still care about the Bill of Rights just got done taking down the DHS ‘Ministry of Truth,’ and a day later, Democrats want to create the DHS Thought Police. You couldn’t make it up if you tried. But they don’t stop there.”

“The bill creates two other Thought Police offices at the Department of Justice and at the FBI, which seems like a self-defeating choice, since elsewhere in the bill, we are told that federal law enforcement is shot through with white supremacists and neo-Nazis,” Paul urged.

The Senator also noted that “None of the bill makes sense. It doesn’t make sense because it was a bill that was never intended to become law. It’s a dumb, Washington talking points memo masquerading as legislation.”

“But congressional Democrats have gotten so radical, so extreme, and so out-of-touch with the American people that when they read it, they see something worthwhile,” he added.

Paul concluded that “This bill will fail today because the Democrats’ message — hate the police, defund the police, slander the military and police as racists and white supremacists — has been roundly rejected by the American people.”

Video: Cruz Asserts “We’re Not Responding To Tragedy By Giving Up Rights”