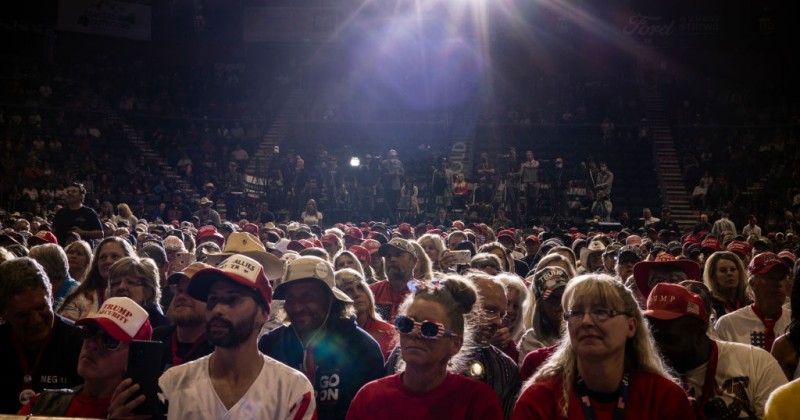 A Yahoo News/YouGov poll has found that 61 per cent of Trump voters think Americans are being deliberately replaced with immigrants as part of a political agenda.

The survey found that a majority of Trump supporters agree that “a group of people in this country are trying to replace native-born Americans with immigrants and people of color who share their political views.”

Only 22 per cent of Trump supporters don’t think that this is happening, while 54 per cent of Republicans as a whole think the ‘great replacement’ is happening in America.

69 per cent of Trump voters are also either very or somewhat concerned that “native-born Americans are losing economic, political, and cultural influence in this country to immigrants.”

Yahoo News describes the view as a “core tenet of the false conspiracy theory known as the “great replacement.”

However, the theory is only dismissed as “false” when it’s voiced by people who oppose it.

Whenever leftists hail the virtues of white Americans being replaced by immigrants, the idea is upheld as a respected, progressive talking point.

Following the Buffalo mass shooting, carried out by a white supremacist who cited the great replacement theory, Joe Biden called for Americans to reject the idea.

However, Biden himself previously asserted that Americans being demographically replaced was a “source of our strength” and something to be “proud of.”

“An unrelenting stream of immigration. Nonstop, nonstop. Folks like me who are Caucasian, of European descent, for the first time in 2017 [sic] we’ll be an absolute minority in the United States of America. Absolute minority,” Biden continued.

“Fewer than 50% of the people in America from then and on will be white European stock. That’s not a bad thing. That’s a source of our strength.”

He repeated the same narrative during a Zoom call with black civil rights leaders in December 2020.

Innumerable leftists, news personalities and politicians have all promoted the inevitability and beneficence of ‘replacement theory’.

What Really Happened Before the Champions League Final