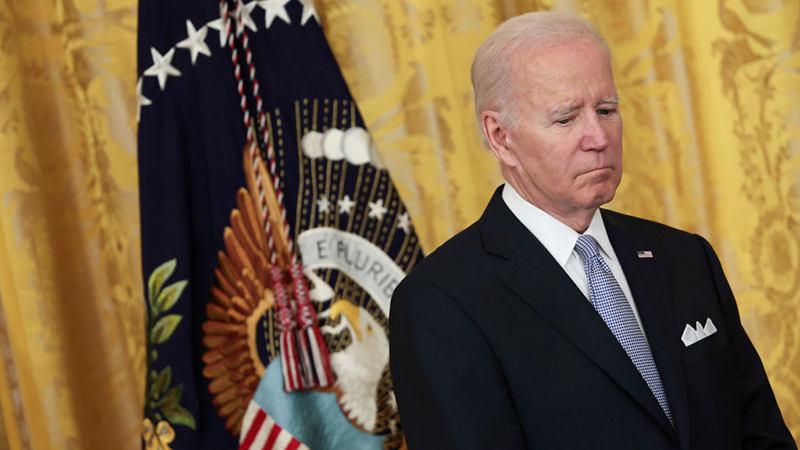 Joe Biden declared Wednesday during remarks on the Texas school shooting that the right to bear arms in the U.S. is “not absolute”.

After signing an executive order to reform policing, and wheeling out George Floyd’s family for the press, Biden addressed the shooting, saying he “just sick and tired.”

“When in God’s name will we do what needs to be done to, if not completely stop, fundamentally change the amount of the carnage that goes on in this country?” Biden continued.

Then came the kicker.

“The Second Amendment is not absolute. When it was passed, you couldn’t own a cannon…there’s always been limitations,” Biden proclaimed.

Biden continually makes this argument. Just last month, he repeatedly lied during a gun control speech, claiming that from its very inception the Second Amendment never allowed for Americans to own any firearms they desire.

It isn’t the first time Biden has made this claim. When he was running against Trump, Biden outlined his gun control manifesto, and further claimed “From the very beginning you weren’t allowed to have certain weapons,” adding “You weren’t allowed to own a cannon during the Revolutionary War as an individual.”

Biden’s claim has been fact checked and found to be completely false.

The Washington Post wrote that “Some readers might think this is a relatively inconsequential flub. But we disagree,” adding “Every U.S. president has a responsibility to get American history correct, especially when he’s using a supposed history lesson in service of a political objective.”

“The president’s push for more gun restrictions is an important part of his political platform, so he undercuts his cause when he cites faux facts,” the Post added.

As we noted yesterday, a whole host of anti-Second Amendment actors again jumped to action within minutes of the horrific event in Texas to play politics.

In response, Florida Congressman Randy Fine tweeted that Biden should “try to take our guns and you’ll learn why the Second Amendment was written in the first place.”

In response, Fine told Florida Today that “Joe Biden needs to learn a history lesson,” adding that “The history of our nation is predicated on people being afraid of an overbearing federal government.”

“Joe Biden can go on TV and not wait one minute before he blames Republicans and demands our guns be seized. That’s apparently ‘peace and unity.’ We respond and we’re riling people up,” Fine further asserted, adding that “If the president of the United States wants to politicize a tragedy, he should expect people to get angry in return.”

Video: Ted Cruz Gets In The Face Of Brit Journalist Who Blames “American Exceptionalism” For Mass Shootings