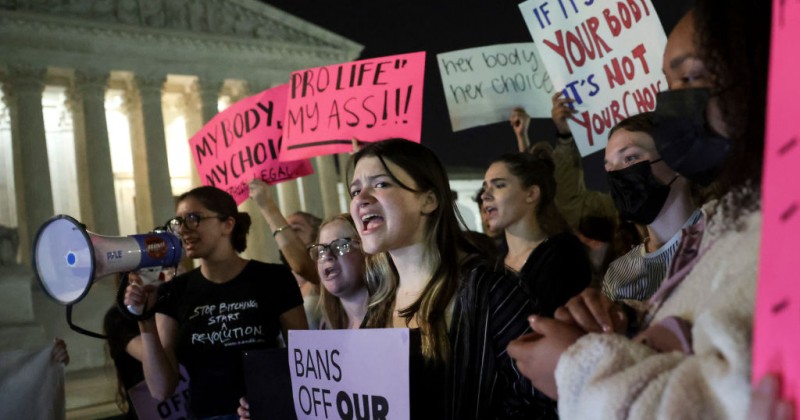 After a draft Supreme Court opinion overruling Roe v. Wade was leaked to the press, speculation turned to who was responsible, with calls for them to be arrested.

The majority of the court has decided to vote 5-4 to overturn federal constitutional protection of abortion rights, with Justice Samuel Alito writing, “Roe was egregiously wrong from the start,” in addition to asserting, “We hold that Roe and Casey must be overruled.”

In an unprecedented move, the opinion was leaked to Politico, presumably in an attempt to create massive social unrest that would lead to one or more of the justices being intimidated into changing their mind.

“But it is not a binding decision of the court unless at least five justices sign it, and this looks like a transparent and unprecedented betrayal by one of the 45 or so people with access to a draft Supreme Court opinion to prevent this decision from becoming law by scaring off moderate justices and attempting to whip the political left into a frenzy,” reports Breitbart.

Experts say the Supreme Court will lose the trust of a generation of Americans if the decision is walked back due to political pressure, but that didn’t stop whichever irate leftist leaked the document metaphorically pulling the pin on the grenade in an attempt to interfere in democracy.

“The American people’s belief in the rule of law would be shaken if they lost respect for this Court as an institution that decides important cases based on principle, not ‘social and political pressures’,” states the leaked document itself.

“But we cannot exceed the scope of our authority under the Constitution, and we cannot allow our decisions to be affected by the extraneous influences such as concern about the public’s reaction to our work,” Alito responds.

Leaking a draft SCOTUS ruling is worse than January 6th. The Court was the one institution where conservatives and liberals lived in peace and trust. You disagreed but the trust was sacred. This completely destroys the Court’s inner workings. Totally in shock right now.

“The fact that some are praising this leak shows how utterly craven we have become in our politics,” tweeted attorney Jonathan Turley. “There appears no ethical rule or institutional interest that can withstand this age of rage.”

The fact that some are praising this leak shows how utterly craven we have become in our politics. There appears no ethical rule or institutional interest that can withstand this age of rage.

Other respondents highlighted how the leak is designed to intimidate the justices, via sparking potential mass civil unrest, into changing their mind.

The perpetrator, who is already being lionized as a hero by the left, should face immediate arrest.

Interference in a Supreme Court decision is a blow to democracy – like, say, stopping an electoral vote

Probably the greatest violation of unwritten "norms" in the history of the Supreme Court.

And I absolutely guarantee you the leaker spent years railing against President Trump's undermining of norms. https://t.co/XSa9LaGb66

This is why they leaked:
"Justices can and sometimes do change their votes as draft opinions circulate and major decisions can be subject to multiple drafts and vote-trading…The court’s holding will not be final until it is published, likely in the next two months." (Politico) https://t.co/9k0JfLfYZd

Democrats are now expected to launch an attempt at court packing before they lose Congress in November, although the 5-4 decision should be rubber stamped before then.

The leaking of the opinion is brazenly an attempt to subvert that process, create more chaos and violence in America, and derail the constitutional functioning of the Supreme Court.

But that won’t matter at all to leftists, who think their moral right to kill babies supersedes all other concerns.

Video: Democratic Witness At Judiciary Committee Abortion Hearing Says Men Can Get Pregnant And Have Abortions 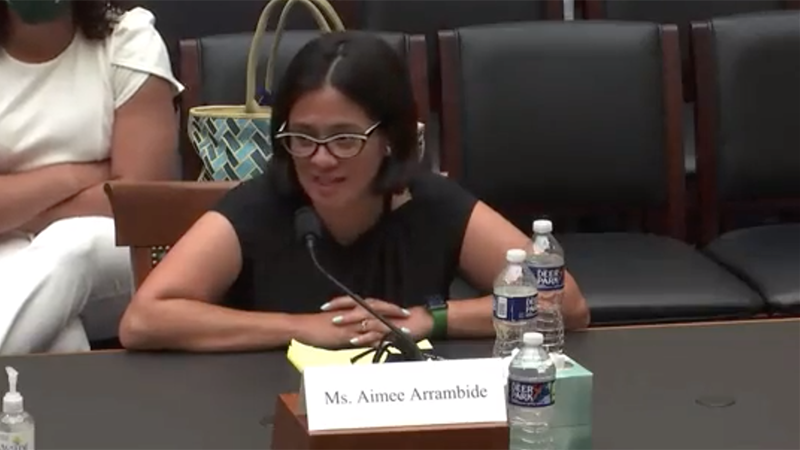 A witness called by Democrats to a Judiciary Committee hearing in the House Wednesday claimed that men are capable of getting pregnant and having abortions if they please.

Aimee Arrambide, executive director of pro-abortion non-profit AVOW was grilled by Republican North Carolina Rep. Dan Bishop, who asked her how she would define a woman.

“I believe that everyone can identify for themselves,” Arrambide responded, prompting Bishop to further ask “Do you believe then that men can become pregnant and have abortions?”

During the same hearing, Bishop asked another Democratic witness, reproductive healthcare Dr. Yashica Robinson, what a woman is.

Robinson responded “I think it’s important that we educate people like you about why we’re doing the things we do, and so the reason why I use ‘she’ and ‘her’ pronouns is because I understand there are people who become pregnant that may not identify that way, and I think it is discriminatory to speak to people or to call them in such a way that they desire not to be called.”

"I'm a woman," she replies. pic.twitter.com/KEH4ngYijk

Biological male human beings cannot get pregnant, have babies or have abortions. Those who claim it is possible are either unaware of basic biological realities, or are engaging in anti-scientific disinformation. 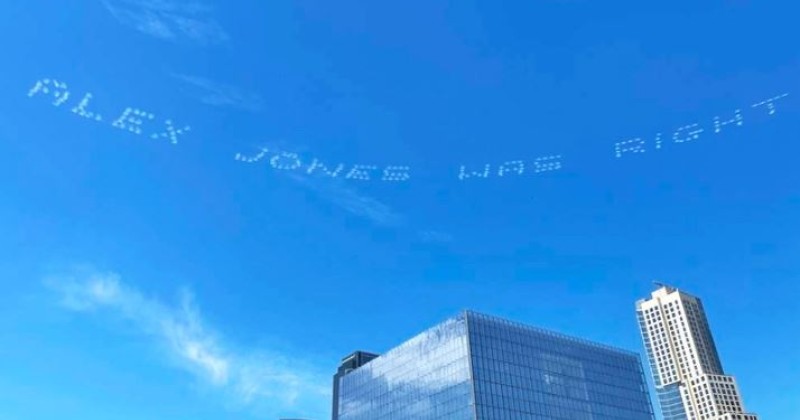 A huge display of skywriting with the words ‘Alex Jones Was Right’ appeared over a pro-abortion protest in Los Angeles over the weekend.

The video clip was sent to comedian and personal friend of Jones Eddie Bravo.

“That is crazy how they’re doing that,” said one of the individuals observing the banner being flown.

“It is pretty wild,” agreed another.

Another onlooker made a joke about chemtrails, perhaps in reference to the fact that skywriting is achieved by having aircraft expel emissions of special smoke during flight that is shaped into the form of readable characters.

‘Alex Jones Was Right’ is a popular meme that repeatedly crops up when the news cycle validates previous assertions and predictions made by the talk show host which were once seen as outlandish or overly conspiratorial.

Another example of that also just occurred with the revelation that old elitists could take advantage of a new scientific discovery that allows the “harvesting (of) the blood and body parts of the young in the hope of achieving immortality.” 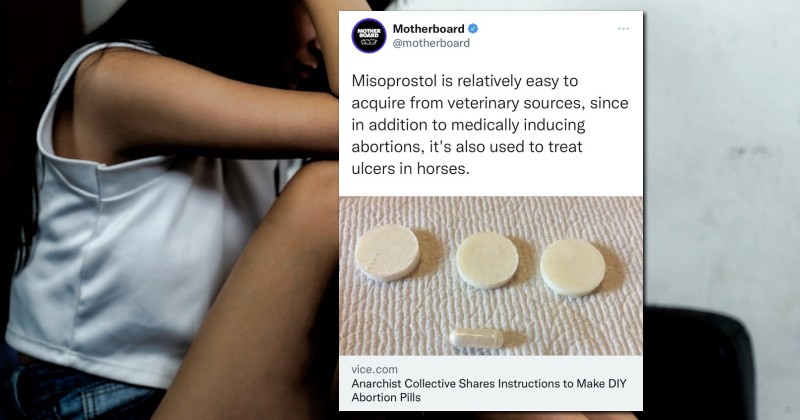 After left-wing news outlet VICE posted a “do it yourself” guide to abortion that included detailed instructions for making ‘abortion pills’, critics pointed out the irony that one the ingredients listed is also used to treat horses.

Over the course of the last year, proponents of Ivermectin, a drug that advocates say helps cure COVID-19, were lambasted by the media for encouraging people to take “horse dewormer,” despite the fact that the drug is also prescribed to humans.

Social media networks acted to censor information regarding the efficacy of Ivermectin as well as banning prominent doctors who endorsed it.

Podcast host Joe Rogan was also pilloried by the mainstream media for saying he took Ivermectin as part of his recovery cocktail after he caught COVID.

VICE previously claimed that Joe Rogan “spread misinformation” about Ivermectin, “the horse-deworming drug he took” when the podcaster contracted the virus.

However, in an article published by VICE yesterday, journalist Jason Koebler encouraged women to seek abortions even if it became illegal in their state, linking to a video in which Mixael Laufer discussed the difficulties of acquiring misoprostol, which is used to treat ulcers in horses.

With the Supreme Court poised to overturn the constitutional right to abortion, an anarchist collective that makes DIY medicine has released detailed instructions for making abortion pills. https://t.co/NZuHrXlWPK

Mike Cernovich questioned whether Twitter would censor the article given its previous efforts to blacklist information about Ivermectin.

.@Twitter will suspend you for mocking masks a tool for stopping Covid, but freely allows users to share tips on scoring black market horse meds that can be used off-label to kill babies https://t.co/4khY2JR7G1

Apparently, taking medication which is also given to horses is only safe and effective if you’re doing so to help left-wing causes like terminating fetuses.