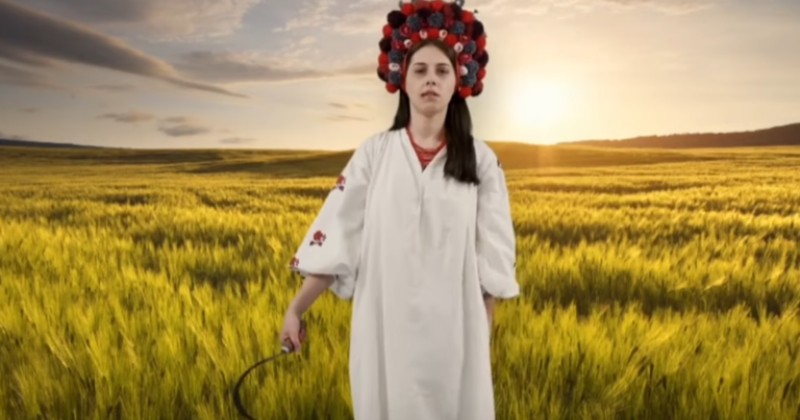 A bizarre video posted to social media shows a woman who is meant to represent Ukraine mock-executing a Russian soldier on camera as she performs an ISIS-style rant about “reaping a bloody harvest.”

The clip shows the woman dressed in traditional garb wielding a sickle, which she later uses to cut the throat of a man kneeling in front of her who is wearing a prison uniform.

“Something terrible woke up the peace-loving and grain-growing nation,” says the actress while flashing a demented smile. “Something that has been dormant for centuries in the bowels of the Dneper banks. Primordial and antique Ukrainian god. And now we’re reaping a bloody harvest. Death awaits you all!”

Adrianna Kurilets a Ukrainian actress appeared on ISIS style beheading video of a Russian soldier. The video contain graphic seen and blood. Which I believe is staged but still under investigation. pic.twitter.com/HZG0omfxEy

“You will all be killed in memory of the victims of Bucha,” she adds, a reference to alleged war crimes committed by Russian soldiers which drew skepticism from some.

“You will all be killed!” she adds before asserting that Russian corpses will “rot in fields” and “be eaten by dogs and wild animals” and “you sons of bitches will never return home.”

The woman, later identified as Ukrainian actress Andrianna Kurilets, then kicks the man to the floor who is bleeding profusely from his neck before stating, “Welcome to hell!”

The video is currently the subject of a criminal probe by Russia’s Investigative Committee.

“In the ad, Kurilets voices extremist statements and cuts a man’s throat with a sickle while smiling. This video has been circulated on social networks and contains explicit hate speech, as well as threat,” said the Committee.

While the video is obviously portrays a mock execution, actual videos of Ukrainian soldiers committing war crimes against Russian prisoners of war have emerged.

Perhaps if you want to convince the world of the need to ‘support Ukraine’, don’t do so by literally mimicking vile ISIS propaganda videos.