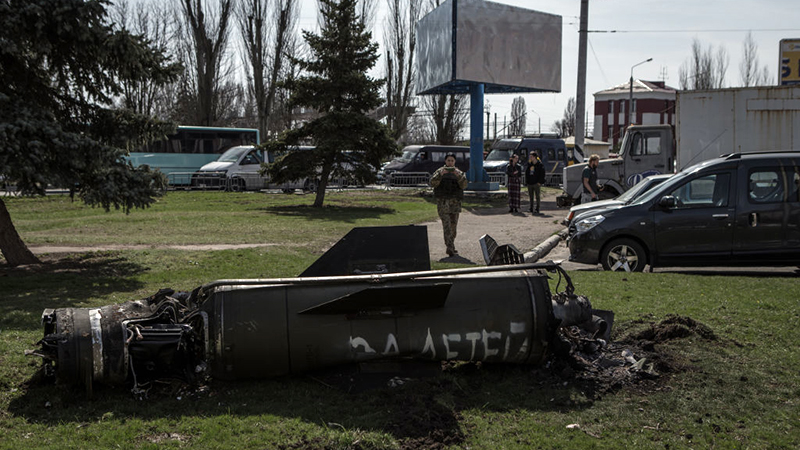 After the Ukrainian government claimed Russian forces carried out a missile strike on civilians inside a railway station, Russia’s Defence Ministry claimed AGAIN that the incident was a premeditated false flag provocation.

The world is now witnessing a vicious cycle where an atrocity is committed, blamed on Russia, and then claimed by Russia to be a false flag carried out by Ukrainians themselves.

The latest example came this morning when scores of people were killed and hundreds injured by an attack on Kramatorsk Railway station.

Just to clarify a linguistic nuance:

The way this is written in Russian "za ditei" means "we are firing this missile in support of/on behalf of the children" and not "this missile is intended for children." https://t.co/lbSF8VsTqf

Ukrainian President Volodymyr Zelensky said that the “Russian military hit the railway terminal,” adding “There are witnesses, there are videos, there are remnants of the missiles and dead people.”

“Why do they need to hit civilians with missiles?” Zelensky continued in an address to Finland’s parliament, adding “Why this cruelty that the world has witnessed in Bucha and other cities liberated by the Ukrainian army?”

He claimed the incident was even more sadistic than the killing of civilians in the Kyiv suburb of Bucha.

russians carried out two missile stikes on railway station in Kramatorsk, where evacuation of civillians was taking place. But russian war criminals not only deliberately targeted thousands of people; they've used cluster munitions.
More than 30 killed
More that 100 injured pic.twitter.com/oj9zMCdIlz

30 refugees, many of them children, were killed in rocket attack on the Kramatorsk railway station while trying to flee west.

Yesterday, Russia struck the tracks, making it impossible to leave. It was repaired & ppl tried to leave today insteadpic.twitter.com/36RsWfOqhK

As you can see, they're not military at all – just ordinary civilians.

Russians knew that the train station in Kramatorsk was full of civilians waiting to be evacuated. Yet they stroke it with a ballistic missile, killing at least 30 and injuring at least a hundred people. This was a deliberate slaughter. We will bring each war criminal to justice. pic.twitter.com/cq0CX9wovV

The Russian MoD responded claiming “Russian armed forces did not carry out any fire missions in the city of Kramatorsk on April 8.”

Calling the attack a “provocation,” the Russian MoD also claimed that fragments of Tochka-U ballistic missiles found near the railway station in Kramatorsk are used only by Ukrainian forces.

Donetsk militia leader Eduard Basurin also claimed that Ukrainian forces deliberately organised the attack on the railway station, stating “A provocation took place in Kramatorsk. The Ukrainian authorities did not hide the fact that they were preparing another provocation. First, an evacuation was announced from the cities of Kramatorsk, Kostyantynivka, Slovyansk. People began to gather in places where you can leave — railway stations. Ammunition hit, there are about 30 dead.”

Militia forces also claimed that the “obsolete Soviet-era missile system” used in the attack “is not registered with the military forces of the Donetsk People’s Republic, Lugansk People’s republic, or the Russian Federation,” adding that “It is, however, being actively used by Ukrainian militants.”

The Donetsk fighters also claimed that earlier in the day Ukrainian forces had fired on the territory over 30 times.

Some claimed that Russian forces initially bragged about the attack but then changed the narrative to claim it was a false flag.

First, Russian bragged about hitting the Kramatorsk railway station. However, later they launched the narrative the Ukrainians did this. These people are sick. Image: @StratcomCentre pic.twitter.com/IydRcJFPPn

Russia posted a video of the launch of missiles from the occupied Donbas but now says that this attack on Kramatorsk railway station was carried out by Ukrainians themselves and removed the video from the Internet. On the rocket that killed civilians Russians wrote: for children pic.twitter.com/AbBxniPhhu

The latest claims of a false flag come after Russia claimed the torture and killing of Ukrainians in Bucha was orchestrated by Ukrainian soldiers.

Russian Foreign Minister Sergei Lavrov described the situation as “yet another fake attack.”

Ukrainian police posted on Facebook that they had conducted a “clearing op” in Bucha the day before videos emerged showing dead bodies scattered around the settlement, as the war of words over the alleged “war crime” continues.

Following the claims of genocide, Zelensky stated that negotiations to end the conflict now “might not happen”.