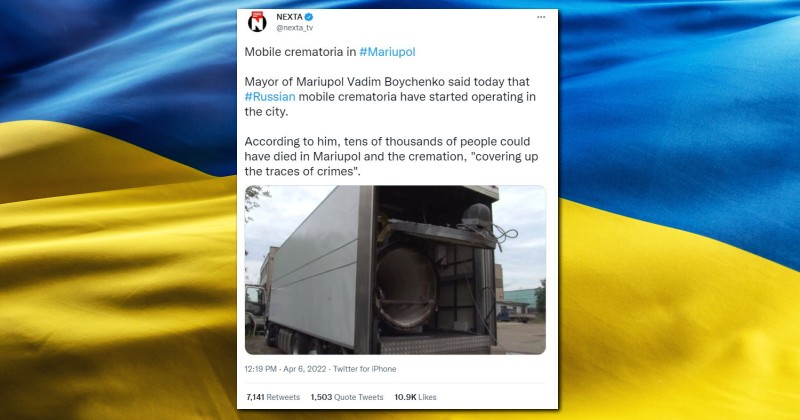 A viral tweet that remains unchecked by “fact checkers” claims to show a Russian-operated ‘mobile crematorium’ in Mariupol, but the image is taken from an 8-year-old YouTube video.

“According to him, tens of thousands of people could have died in Mariupol and the cremation, “covering up the traces of crimes”.

According to him, tens of thousands of people could have died in Mariupol and the cremation, "covering up the traces of crimes". pic.twitter.com/mVj6dC3xK4

Except a simple reverse image search reveals the ‘mobile crematorium’ to be a screenshot from an 8-year-old YouTube video.

An image from an 8 year old YouTube video is being shared, starting yesterday, as if it’s a current photo of a mobile crematorium being used by Russia to hide causalities

"are we going to talk about the fact that this photo is a screenshot from a 2013 video of the demonstration of the in-50.1, a waste disposal machine?" https://t.co/gsZ0yzBgeP https://t.co/bRsIx8NpBY pic.twitter.com/XXnUaNmJyt

Much vaunted “fact checkers” are yet to comment on the issue, and Twitter hasn’t placed a ‘warning label’ on the tweet letting users know it is fake news.

Twitter users pointed out that this is recycled propaganda, since the same debunked claim about “mobile crematoriums” was made at the start of the war.

This is the 2nd time they've run this fake story. This "mobile crematoria" nonsense was done at the beginning of the war, right around the time of "Snake Island."

They've run out of propaganda, so they're recycling it now. https://t.co/S5FhP8T6Ud

The tweet emerged at the same time Ukrainian authorities in Mariupol started claiming that Russian troops are “burning the bodies of tens of thousands of civilians” as part of a “new Auschwitz.”

Seizing on the outrage sparked by alleged war crimes in Bucha, Mariupol City Council said, “Russian mobile crematoriums have been launched” in the city.

Mariupol’s Mayor called his city the 'new Auschwitz' as he claimed Russian troops are burning the bodies of 'tens of thousands' of bodies to cover up the scale of the civilian massacre https://t.co/bJ56FLuZvK

“The world has not seen the scale of the tragedy in Mariupol since the existence of Nazis concentration camps,” claimed Mayor of Mariupol Vadim Boychenko.

There have been innumerable fake news incidents either staged entirely or fabricated by Ukrainian officials which have gone unchecked by “fact checkers” since the start of the war.

They include the ‘Ghost of Kiev’ farce, the supposed ‘slaughter’ of Ukrainian soldiers on Snake Island and the ‘attack’ on a Holocaust memorial in Kiev that never happened.