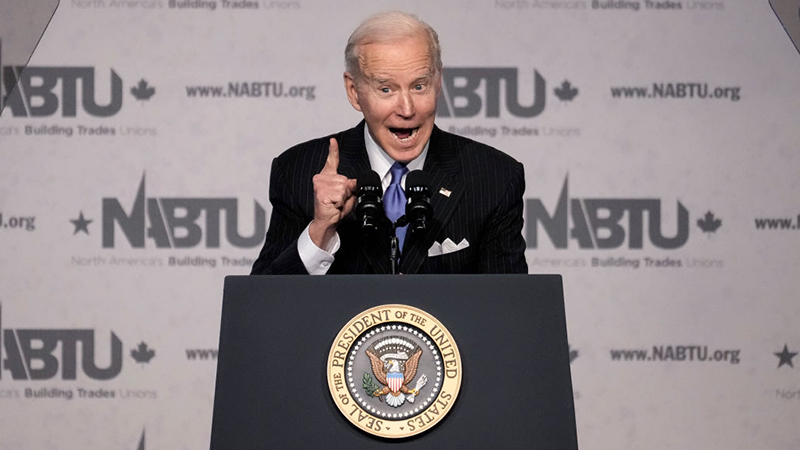 In another incredible moment of stupidity Wednesday, Joe Biden deviated from his teleprompter and joked that he might start a third world war.

Biden was speaking at the national conference of North America’s Building Trades Unions, the AFL-CIO group for workers in the construction industry, when he made the idiotic remark.

Biden began talking about the Ukraine conflict, saying “This war could continue for a long time, but the United States will continue to stand with Ukraine, the Ukrainian people and their fight for freedom.”

Then he addressed the unionists in the room and said, “And by the way, if I gotta go to war, I’m going with you guys – I mean it.”

In addition to the stupid joke about nuclear armageddon at the appearance Wednesday, Biden reeled off a series of outright lies again.

Earlier in the week he declared that he used to be an 18 wheeler truck driver, but now he used to be a practicing professor at the University of Pennsylvania:

That wasn’t where the lies ended for the day.

Whenever Biden is talking about something that he knows isn’t true or is just dumb, he caveats it with the phrase ‘this is not a joke’:

During the speech he also did that bizarre creepy whispering thing while threatening to force American companies to unionise:

Video: Watch The Insane Reaction U.S. Troops Had For Elon Musk During Visit