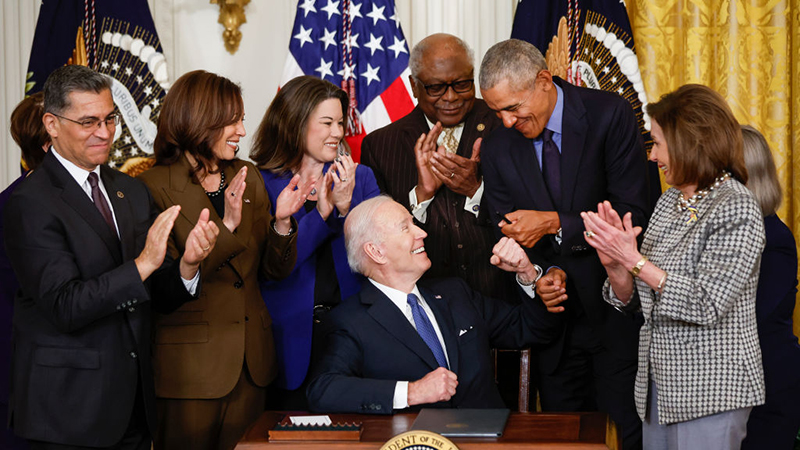 Fox News host Tucker Carlson noted that footage of Joe Biden wandering around the White House on his own as the rest of his handlers and Democratic underlings fawn before a visiting Barack Obama is a perfect visualisation of what the future holds.

After playing the footage, Carlson pointed out that “no one in Washington thinks the Biden presidency is glorious anymore. They think it’s a disaster. Polls show that voters strongly agree. Joe Biden is now the most unpopular person in virtually any room he enters.”

Carlson described the scene at the White House, noting that “Biden tried to horn in on the conversation swirling around Obama. Everyone involved in that conversation, including Kamala Harris, who supposedly works for Biden, ignored Biden completely.”

He continued, “Biden desperately tried to get Obama’s attention. He puts his hand on Obama’s shoulder. He even calls him “Barack” like they’re friends, but Obama blows him off. He acts like Biden is not even there. Ask yourself if you have ever in your life, seen anything sadder than that?”

The host then pointed out that Obama for years maligned Biden, kept him on the periphery and “mocked him relentlessly as an old White guy.”

Carlson compared Biden’s abandonment to a pack of dogs leaving behind an old weak member, declaring “it’s nothing personal. It’s a matter of group survival and that’s exactly how the Democratic Party operates.”

He continued, “Individuals are irrelevant to the party. The group is all that matters. No one at the DNC actually cares about Joe Biden or ever has.”

“On some level, Joe Biden knows this. He’s spent his life in the Democratic Party. He’s never worked outside of the Democratic Party, so he understands how this ends. Inevitably, after 50 years, it is his turn to be eliminated,” Carlson explained, adding “they’ve decided to replace Joe Biden, period, but how will they do it and who will they replace him with? That’s what we don’t know. “

Video: Biden Babbles And Lies About Being An 18 Wheeler Truck Driver… AGAIN