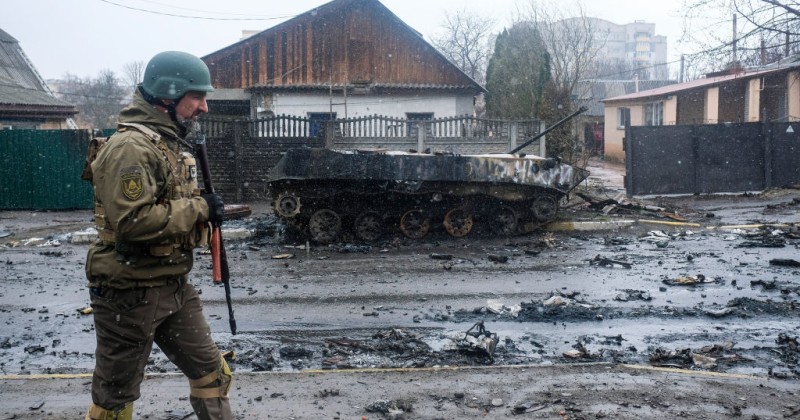 Ukrainian police posted on Facebook that they had conducted a “clearing op” in Bucha the day before videos emerged showing dead bodies scattered around the settlement, as the war of words over the alleged “war crime” continues.

NATO powers and pro-Ukraine commentators have seized upon the alleged atrocity in a bid to escalate the war, with MSNBC hosts and guests even asserting that it justifies directly attacking Russia and putting American boots on the ground in Ukraine.

MSNBC this morning is a full-fledged editorial for direct US/NATO intervention. The outright pro-war advocacy has reached another gear pic.twitter.com/KYLcxYcUEv

Former Army Major John Spencer also appeared on the same show to demand American “boots on the ground” in Ukraine.

The only evidence offered so far pointing to Russian responsibility is the claims of Ukrainian authorities, with are being breathlessly amplified by the mainstream media without an ounce of skepticism.

Margaret Brennan of CBS admitted that Ukrainian President Zelensky’s team had “handed” her the videos and they were broadcast, as journalist Michael Tracey wrote, with “zero independent corroboration.”

Margaret Brennan of CBS admits that Zelensky's "team" handed her some photos/videos, and she's now going to broadcast them on TV with zero independent corroboration. Just openly purveying a foreign country's war propaganda. This is what's considered Real Journalism™ in the US pic.twitter.com/PCXZ11w2kR

The notion that Ukrainian authorities, who have been caught staging innumerable incidents already in a bid to lobby for more NATO military involvement, would lie about this is seemingly not even a consideration.

A timeline provided from reporting by the New York Times suggests that pro-Ukrainian Azov neo-nazi militants entered Bucha after Russian troops left and after the Mayor of Bucha had announced the town’s liberation with no mention of any atrocities.

One member of Azov was reportedly heard asking if he could shoot individuals who weren’t wearing blue armbands.

Lat night, Sergey "Boatsman" Korotkikh, infamous Neo-Nazi & member of Azov, posted a video titled "The BOATSMAN BOYS in Bucha". At the 6 second mark you can clearly hear the dialogue:

"There are guys without blue armbands, can I shoot them?"
"Fuck yeah" pic.twitter.com/n8WY1D0xRe

Another report asserts that Ukrainian national police posted on Facebook how they had conducted a “clearing operation” in Bucha before the alleged atrocities occurred accompanied by a video of their men walking around the town.

“Today, on 2 April, in the liberated city of Bucha, Kiev region, special units of the Ukrainian National Police began clearing the area of saboteurs and accomplices of Russian troops,” the Facebook post said.

As ever, with propaganda on both sides, it is virtually impossible to know what happened in Bucha, but to claim it’s an open and shut case of “war crimes” as the western media proclaims without any independent evidence is clearly ludicrous.

Zelensky Declares Peace Negotiations With Russia Now ‘Might Not Happen’