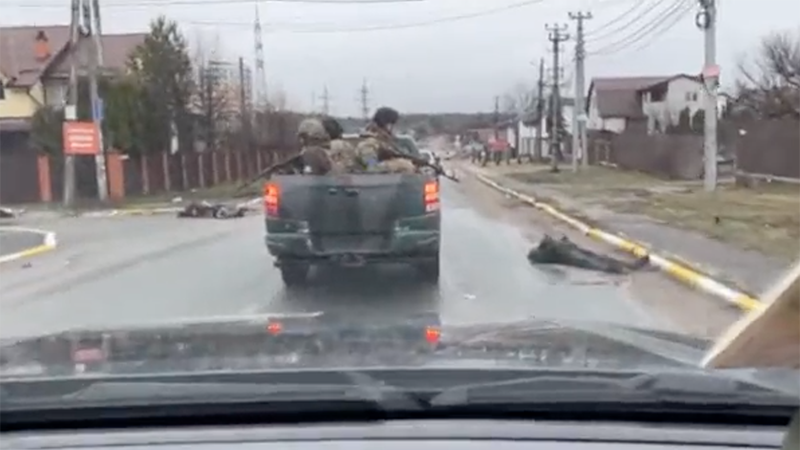 Russia has responded to claims that its forces committed war crimes by brutally Murdering civilians in a town close to Kiev, calling the incident “fake” and labelling its orchestration as a “staged” false flag “provocation.”

The so far unverified claims of the Ukrainian mayor of the town Bucha that Russian forces tortured and massacred civilians have been amplified by the media.

The mayor Anatoliy Fedoruk shared footage and photographs of dead bodies strewn about the streets of Bucha, which is 23 miles northwest of Kyiv.

“Any war has some rules of engagement for civilians. The Russians have demonstrated that they were consciously killing civilians,” Fedoruk told Reuters, claiming somewhere in the region of 300-400 civilians were slaughtered.

In a statement, the Russian defence ministry responded, asserting that “During the time that Russian armed forces were in control of this settlement, not a single local resident suffered from any violent actions”.

The ministry claims that Russian troops withdrew from the area on March 30 after leaving 452 tons of humanitarian aid to civilians.

“For the entire time that the city was under the control of the Russian armed forces and, and afterwards, until today, in Bucha, local residents freely moved around the city and used cellular communications,” the statement also claimed.

Russian Foreign Minister Sergei Lavrov described the situation as “yet another fake attack.”

“We requested an urgent meeting of the Security Council on this specific issue because we see such provocations as a direct threat to international peace and security” Lavrov further proclaimed.

“Russian servicemen left this city on 30 March, on 31 March the mayor of the city solemnly said that everything was in order, and two days later we saw how that very performance was organised on the streets, which they are now trying to use for anti-Russian purposes”, Lavrov continued.

Reporting on the Ukrainian claims, MSNBC host Ale Velshi called for “direct military involvement” by NATO in Ukraine, and U.S. “boots on the ground”: