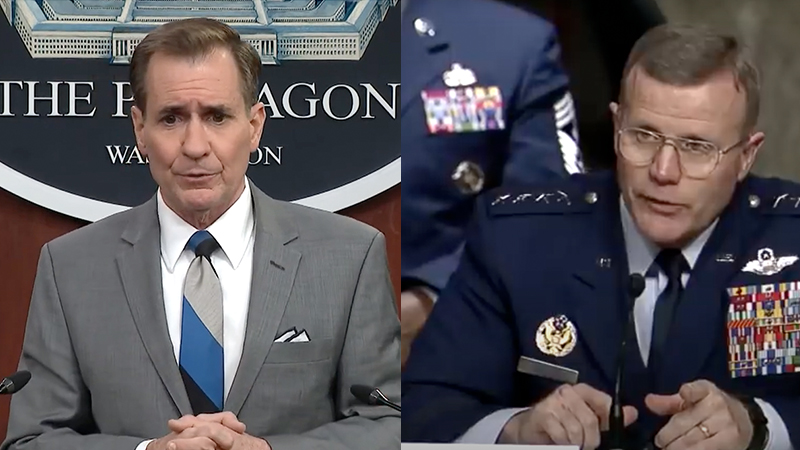 The White House has spent the past fortnight explaining and walking back idiotic and dangerous statements by Joe Biden, the latest coming on Tuesday after he appeared to admit the U.S. is training Ukrainian troops in Poland.

Biden was asked Monday during a disastrous presser what he meant when he previously appeared to tell U.S. troops that they would be deployed to Ukraine (below).

Biden claimed that he meant U.S. troops are “helping train the Ukrainian troops that are in Poland.”

“I was referring to being with, and talking with, the Ukrainian troops that are in Poland,” he claimed, trying to get out of one calamitous statement by blurting out another equally dangerous comment.

Biden’s bumbling forced White House communications director Kate Bedingfield to have to explain Tuesday that no no “compromised information” was revealed by Biden.

Bedingfield claimed that Biden was saying that the troops he met in Poland are “routinely” interacting “with Ukrainians.”

“That being said, there’s nothing further that I have to say on that beyond what the president said yesterday,” she added.

When another reporter asked “Are they training in Poland or not?” Bedingfield responded “Well, as I said, there is regular interaction between Ukrainian soldiers in Poland and the US troops that the president saw on the trip.”

The Pentagon was also forced to explain what in the hell Biden meant, with General Tod Walters telling Republican Senator Tom Cotton of Arkansas during a hearing “I do not believe we are in the process of currently training military forces from Ukraine in Poland.”

“There are liaisons that are there,” Walters continued, adding “They’re being given advice, and that’s different than I think (what) you’re referring to with respect to training.”

Pentagon spokesman John Kirby also told reporters that U.S. troops in Poland are merely “liaising” with Ukrainian forces, noting “It’s not training in the classic sense that many people think of training.”

Kirby did not provide any further details on the matter.

Last week Kirby appeared to admit that Ukrainian troops have been being trained by the U.S. for some time:

Unsurprisingly, in the wake of multiple statements that are a risk to national security, Biden was allowed to take just one question from reporters on Tuesday: