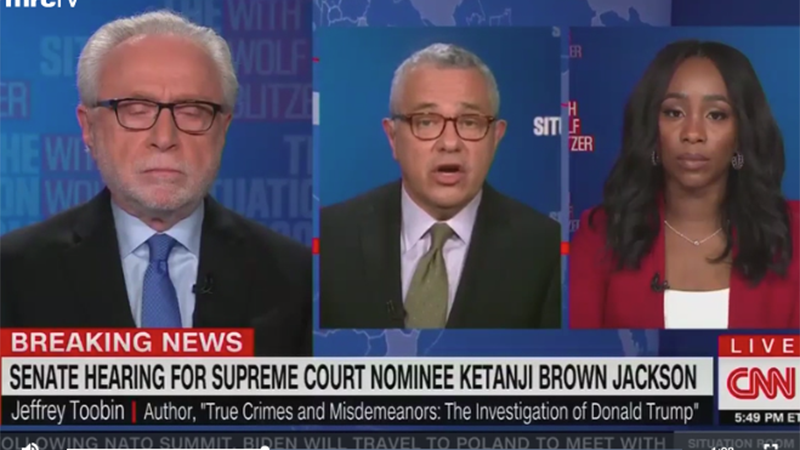 He continued, “Federal judges have been struggling with the issue of how do you create a fair system that was designed pre-internet, yet you have to sentence people post-internet.”

Toobin further stated “Judges across the country, including Republican-appointed judges, have been saying ‘look, we can’t apply the rules that were designed pre-internet for an internet society and many judges have been giving somewhat less sentences as a result.”

Toobin continued, “This is about appealing to the QAnon audience, this cult that is a big presence in Republican Party politics now, that is – where Senator Hawley is trying to ingratiate himself with that group and run for president with their support.”

Senior political correspondent Abby Philip also agreed with Toobin that Hawley is engaging in a “dog whistle to the kind of QAnon-right.”

Jackson was further grilled on the matter Tuesday by Senator Ted Cruz, who asked “Do you believe the voice of the children is heard when 100 percent of the time you’re sentencing those in possession of child pornography to far below what prosecutors [were] asking for?”

Video: Ted Cruz Demands To Know Why Ketanji Brown Jackson Cannot Define What A ‘Woman’ Is