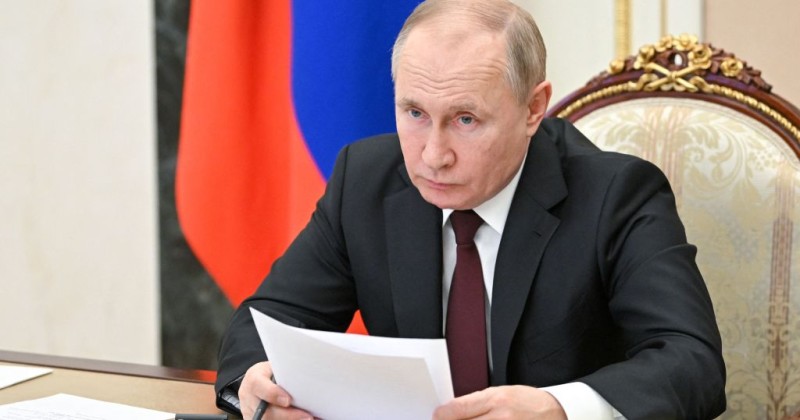 Vladimir Putin gave a speech in which he blamed the ‘western ruling elite’ for creating the economic hardships impacting people in Europe and the United States.

During a speech that was broadcast live on Russian television, the Kremlin frontman also slammed Russian oligarchs fleeing to Israel as a “fifth column” of “national traitors” who see themselves as a “superior race” and “cannot make do without foie gras, oysters or gender freedom as they call it.”

“Any nation, and even more so the Russian people, will always be able to distinguish true patriots from scum and traitors and will simply spit them out like an insect in their mouth, spit them onto the pavement,” Putin ranted.

“I am convinced,” said Putin today in this chilling warning about how the West was seeking to use a “fifth column” to bring about the destruction of Russia, “that such a natural and necessary self purification of society will only strengthen our country.” pic.twitter.com/ZqhCQZsAqZ

“I am convinced that a natural and necessary self-detoxification of society like this would strengthen our country, our solidarity and cohesion and our readiness to respond to any challenge,” he added.

The Russian president also directly addressed westerners who are being told by the legacy media that skyrocketing gas prices and other economic hardships are purely to blame on Putin.

“I want ordinary Western people hear me, too,” Putin said. “You are being persistently told that your current difficulties are the result of Russia’s hostile actions and that you have to pay for the efforts to counter the alleged Russian threat from your own pockets. All of that is a lie.”

“The truth is that the problems faced by millions of people in the West are the result of many years of actions by the ruling elite of your respective countries, their mistakes, and short-sighted policies and ambitions. This elite is not thinking about how to improve the lives of their citizens in Western countries. They are obsessed with their own self-serving interests and super profits.”

No doubt that very same elite will now cite Putin’s criticism of them as reason to assert they have the moral high ground.

Putin is now so roundly vilified, he is turning into some kind of mythical Emmanuel Goldstein figure onto which every crisis and catastrophe can be pinned by the regime.

A Strange Form of Democracy