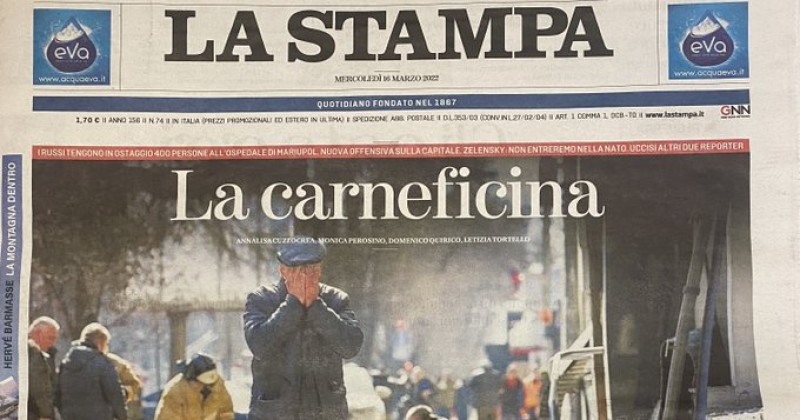 Italian newspaper La Stampa has denied accusations it engaged in disinformation by publishing a front page photo of a Ukrainian ballistic missile strike on Donetsk while suggesting it had been carried out by Russia.

The daily news outlet promised readers coverage of Russian attacks in Kiev and Lvov alongside a headline that read “The Carnage”.

The headline was illustrated with an image of a man covering his face in grief as dead bodies lie around him along with lines about “traumatized children in Lvov” and “Kiev preparing for the final assault” by Russian troops.

The photograph actually showed the aftermath of a ballistic missile strike on Donetsk, the capital of a pro-Russian breakaway republic in eastern Ukraine, after it was hit by a tactical Tochka-U ballistic missile that was almost certainly launched by Ukraine.

However, editor-in-chief Massimo Giannini vehemently denied in an interview that the publication had deliberately misled readers.

“The thing that bothers me most and pains me a lot is that there are also some people here in Italy, some disgraced people of the web, who amplify this and call it a case of disinformation,” said Giannini.

“Where is the disinformation?” he asked.

How about right there on your front page, Massimo?

Imagine if a Russian newspaper had published emotive front page coverage of alleged Ukrainian attacks on pro-Russian rebel areas of the country and then illustrated it with images that actually showed Russian attacks on Kiev.

Critics would immediately denounce the publication for engaging in egregious disinformation, and they’d be right.

Apparently though, amidst the ideological clamor to support the “current thing,” only Russia engages in propaganda and disinformation.

UPDATE: The Ukrainian government is also tweeting the same photos claiming they are evidence of Russian atrocities!

You may not understand the language, but the grief on the faces of these people is clear to everyone.

“We Will Never Forget Who Bombed Our Embassy in Yugoslavia”: China Chides NATO Moral Exhibitionism