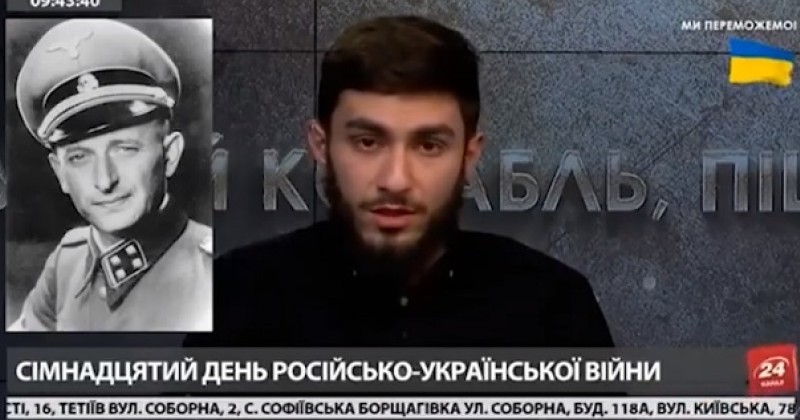 Sharafmal uttered the vile comments during a segment on the Channel 24 news station.

“I know that as a journalist, I have to be objective, I have to be balanced, in order to report information to you with a cold heart, but to tell you the truth, it’s very hard to hold on now, especially at a time like this, and since we are called Nazis, fascists, and so on in Russia — I will allow myself to quote Adolf Eichmann, who said that in order to destroy a nation, you must destroy, first of all, children. Because if you kill their parents, the children will grow up and take revenge. By killing children — they will never grow up and the nation will disappear,” Sharafmal said.

He then went on to assert that he would personally kill Russian children.

“Since you call me a Nazi, I adhere to the doctrine of Adolf Eichmann, and I will do everything in my power to ensure that you and your children never live on this earth.”

And if you were left in any doubt as to Sharafmal’s intentions, he again made clear that he wanted to “slaughter” Russian families.

“We need victory,” Sharafmal said. “And if we have to slaughter all your families to do it — I’ll be one of the first to do it. Glory to the nation! And hope that there will never be such a nation as Russia and the Russians on this earth again. Because they are just scum who are destroying this land. If the Ukrainians have the opportunity, which they are basically doing right now, to destroy, to slaughter, to kill, to strangle the Muscovites. And I hope that everyone contributes and whacks at least one Moskal.”

Many questioned the authenticity of this pro-genocide Ukrainian TV broadcast.

You can see that they end the clip right before the host goes on his rant quoting Nazi mass murderer Adolf Eichmann.https://t.co/i2hJfdYKGv https://t.co/zwekUuYcth

Channel 24 is controlled by Kateryna Kit-Sadova, the wife of Lviv Mayor Andriy Sadovyi, according to Wikipedia.

The genocidal rant is also uploaded to YouTube without any censorship, despite YouTube previously slapping an “offensive content” warning on a Fox News interview in which Tulsi Gabbard denounced the “war machine.”

After Ukraine’s Special Operations Command announced on Facebook their plans to start committing war crimes, Facebook issued a press release saying they would allow the platform to be used to make calls for violence against Russians.

Remember to support Ukraine, everybody!

WWIII: Biden Sending THOUSANDS Of Marines To Australia In Anticipation Of Conflict With China