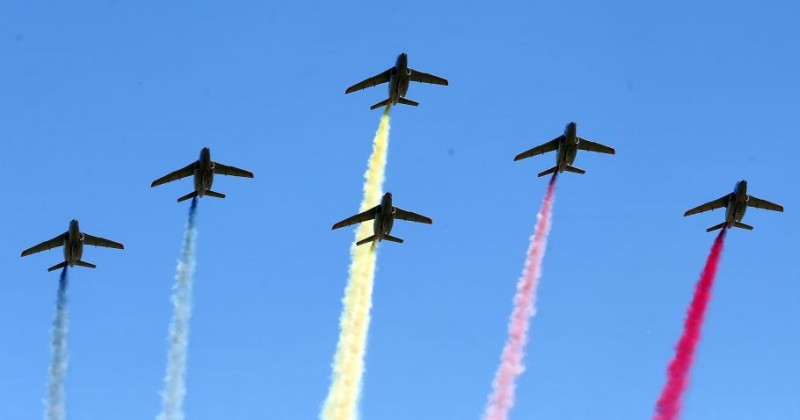 Journalist Dan Hodges faced a backlash on Twitter for asserting a no fly zone should be imposed over Ukraine, something that would almost inevitably start World War III, because Vladimir Putin is no different from Hitler.

Hodges, who spent much of the last two years cowering in his house afraid of a virus with a 99%+ survival rate for his age bracket, was noticeably more strident when it came to the potential for a global nuclear apocalypse.

“If people want to oppose a no-fly zone, fine. But understand that is an act of appeasement no different to our appeasement of Hitler in 1938. We are refusing to do what we know is morally right out of fear. We are prepared to let a free nation die to safeguard ourselves,” he tweeted.

If people want to oppose a no-fly zone, fine. But understand that is an act of appeasement no different to our appeasement of Hitler in 1938. We are refusing to do what we know is morally right out of fear. We are prepared to let a free nation die to safeguard ourselves.

“It would essentially mean the U.S. military would be shooting down Russian planes,” said White House press sec. Jen Psaki, leading to “a war with Russia.”

White House press sec. Jen Psaki tells @marykbruce any potential no-fly-zone would "essentially…be a step toward" a direct conflict, and "potentially a war with Russia, which is something we are not planning to be a part of."

Senator Marco Rubio also warned that setting up a no fly zone “would lead to World War III.”

Sen. Rubio says setting up a no-fly zone in Ukraine would lead to World War III.

“People have to understand what that means. That means a willingness to shoot down Russian planes. And that would mean World War III.”

Hodges faced a Twitter backlash in response to his hysterical demand.

Dan, if I had your track record of being wrong about everything that has ever happened, ever, I would probably sit out the bit where people start deciding strategy for dealing with a nuclear superpower.

if there's one thing that's sure to de-escalate the situation, it's Britain shooting down a Russian plane

Try really hard to disengage your emotion gland for one second and play out what happens when a NATO plane shoots down a Russian jet. Don't think Putin suddenly goes "Oh every action I have ever done to date has been wrong, I'll pull back from Ukraine and open Gay saunas"

Trying to explain to Dan Hodges that Hitler didn’t have nukes pic.twitter.com/H9Ko0BaGf5

Glenn Greenwald also pointed to two other examples of journalists in the U.S. clamoring for a no fly zone.

Second NBC/MSNBC personality today, after @RichardEngel, to casually suggest that the US and NATO should brush off the risk of global nuclear annihilation to go militarily confront Russia directly over . . . Ukraine. https://t.co/EvEYH71f78

Commentators noted the irony of Hodges having been a staunch advocate for lockdown now boldly banging the drums for global warfare.

Dan, you barely left your house for two years as you were so scared of COVID. You were terrified of pubs. Now you’re a cheerleader for Armageddon?

Why is it that all those pyjama clad, blue ticked zoomsters who wanted to lock us down, muzzle us and forcibly jab us, also seem to be mad keen on dragging us all into world war three?

The last time NATO imposed a ‘no fly zone’ – over Libya – it led to;

And all that would be a walk in the park compared to what would happen if one were imposed over Ukraine.

The First Casualty of War is Truth