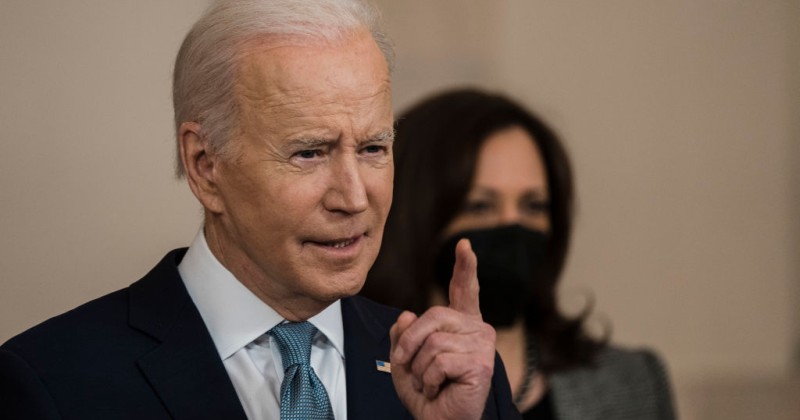 Crucially, the Washington Post/ABC News poll also found that a strong majority of Americans believe Biden is mentally unfit to serve as president.

Conducted after Putin ordered ‘peacekeeping troops’ to invade rebel areas of Ukraine and released days before Biden is due to give his State of the Union speech, the survey reveals that Biden has the lowest job approval rating – 37 per cent – since becoming president just over a year ago.

The poll reveals that the “underlying weakness” driving Biden’s poor showing is doubts about his personal capacities, with 59 per cent saying he wasn’t a strong leader compared to 36 per cent who said he was a strong leader.

54 per cent of Americans do not think Biden has the “mental sharpness” to serve as president, compared to 40 per cent who say he does.

When that same question was asked about Biden the presidential candidate in May 2020, 51 per cent thought he had the mental sharpness to serve compared to 41 who did not think so.

“Biden seemed to have lost independents, a critical polling group, on this topic,” reports Breitbart. “Fifty-nine percent of the independents gave the president’s mental sharpness a negative assessment, a rise of 13 percentage points since May 2020.”

The poll numbers underscore the fears of many Democrats, namely that Biden will emerge from the crisis with Russia looking like Jimmy Carter – weak and diminished.

As we highlighted last week, only a quarter of Americans believe the United States should play a ‘major role’ in the war in Ukraine, while 20 per cent don’t want any involvement whatsoever.

That poll also found that 55 per cent thought Biden was mishandling the Russia situation, with only 36 per cent believing he is doing a good job.

Video: Jill Biden Introduces Kamala Harris As “The President Of The United States”