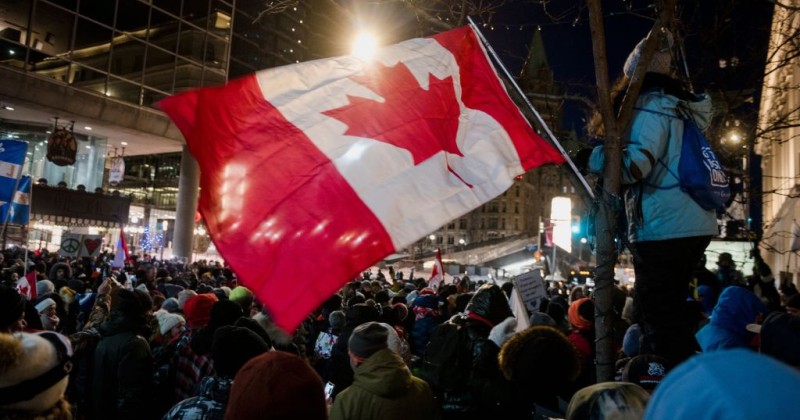 Precise Google Maps locations of people in Ontario, Canada who donated to the Freedom Convoy was posted online as a result of the GiveSendGo hack that was incited by the media.

Following the legacy media-led demonization of the Canadian truckers and their supporters, the names of 90,000 people who donated to the cause were leaked.

Now a Google Maps link was posted, “pointing to locations of donors throughout the Canadian province, with each pin listing their names, donor ID, email address, and the amount they donated, including those as low as $10,” reports Breitbart.

After being public for hours, Google finally terminated the link, which has now been replaced with a message that states, “This map is no longer available due to a violation of our Terms of Service and/or policies.”

I’m not going to post the actual url out of respect for those people but trust me, it’s real and a lot of data.#abpoli #canpoli pic.twitter.com/wCcus5o1gG

I took an example and crossed out the specific person's name, email, donation amount etc. to protect that person. There are 100's of these. pic.twitter.com/PnYwZ8XUnt

Following the GiveSendGo hack, numerous journalists attempted to harass the people whose names appeared on the list, including reporters from the CBC and the Washington Post.

Email provided to me by a source pic.twitter.com/qbzebYyHiP

As we highlighted yesterday, Canadian MP Mark Strahl related how a single mother in his district has had her bank account totally frozen by the Trudeau regime after she completely legally donated $50 to the trucker Freedom Convoy.

Authorities have now moved to make parts of the notorious ‘Emergencies Act’, including the asset freezing component, a permanent fixture.

The law was used as justification for the violent brutalization of protesters, including police horses being used to trample disabled demonstrators.