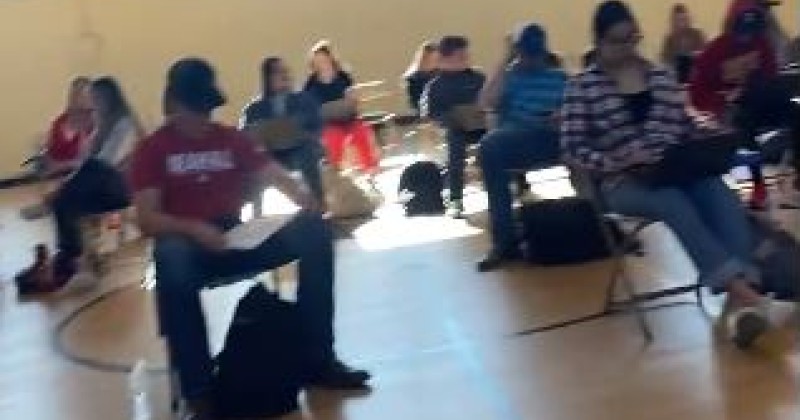 Hundreds of students were segregated in gyms and cafeterias after protesting against school mask mandates in schools throughout Oakland, California.

After images emerged of Gov. Gavin Newsom maskless at the 49ers-Rams football game over the weekend, parents and students coordinated to stage the demonstration.

“Our own governor doesn’t follow these rules, so why should our children have to be wearing a mask?” asked parent Jennifer Henry. “He’s at this football game with all these people.”

Another parent, Jennifer Poth, said her 8-year-old son went to school without a mask on Tuesday, prompting school officials to call her on the phone.

“They called me to ask me to pick him up, and I refused. I said, ‘No. It is your job to educate my son, and he has every right to be there,'” Poth said.

It subsequently emerged that her son was “forced him to go outside in 43-degree weather and sit there and try to do schoolwork,” prompting Superintendent Dave Kline to issue an apology.

“More students districtwide went to class without a mask on Wednesday,” reported KCRA 3.

Another video showed a group of seniors segregated inside a gym being made to sit ‘socially distanced’ from one another.

Oakdale CA students throughout the district are refusing to wear masks. High schoolers have been sent to the gym and filled it with more unmasked students on their way.

These kids are following the governor’s example and we are here to legally support their rights. pic.twitter.com/6cDZOkWvpv

“Today there are a few schools throughout town where protests have taken place related to the COVID-19 mask mandate. These gatherings have been small in nature and have been peaceful,” the Oakdale Police Department wrote on Facebook.

A similar protest was also organized by students at Washougal High School in Washington State.

One video clip shows a protest organizer eloquently explaining the goal of the protest and the importance of optics.

The video went viral on Twitter, attracting over 1 million views.

A follow up clip showed the students walking into the school unmasked.

Looks like this is Part 2
I am not familiar with anyone involved with this video. It popped up on a local Telegram group.

Like everyone else, I am SO impressed by the young man speaking, along with the students who participated from Washougal High School. pic.twitter.com/k6ULXygY15

As we previously highlighted, there have been several instances of activist teachers literally taping masks to children’s faces as they imposed their demented COVID religion on minors.