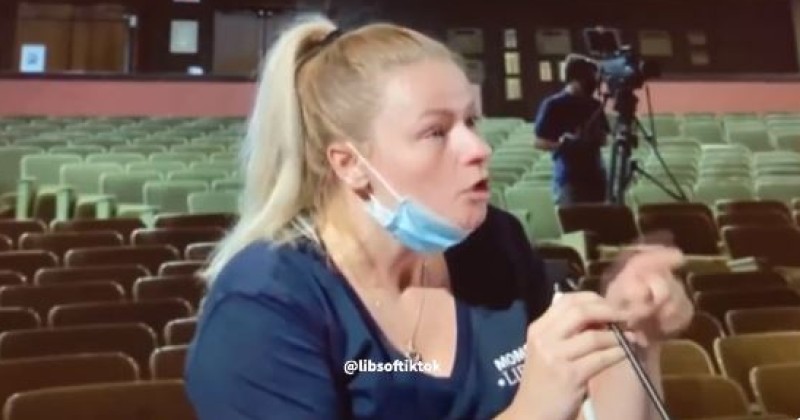 A 5th grade teacher working in the North Penn School District made white elementary school children apologize to black kids for their skin color, according to irate parents.

The sensational claim was made during a school board meeting by the mother of a child who attends AM Kulp Elementary School.

“I actually pulled my daughter out of AM Kulp because of the 5th grade teacher who lined those students up, from whitest to darkest,” she said.

“(The teacher) made them turn around and made the white ones apologize to the black ones – now do not tell me that did not happen in this district,” the mother added.

“You need to put an end to this. Kids do not see color and you are segregating them and you are separating them. This is not OK. Do something or get out of those damn chairs!” she concluded.

The mother’s complaint was bolstered by a further claim by another individual at the meeting who described how the same teacher forced children to take part in a ‘privilege walk’ multiple times.

This teacher also allegedly made her students participate in a “privilege walk” pic.twitter.com/AoUOA4Pe9C

“This board has repeatedly denied an activity that has taken place at AM Kulp Elementary…it happened in the courtyard…not once but four times,” said the speaker.

Explaining that multiple different parents had told him that this had happened, the speaker also related how the teacher in question “also added at one point when she asked about a band aid with a mini-megaphone, the teacher told the student to get back on the wall because her parents were from India.”

The speaker finished by accusing the school board of falsely denying that such events were taking place.

Last month, we highlighted an image that went viral showing a North Penn teacher forcibly taping a mask to a child’s face.

Parents across the country have come under attack by both the media and the government for their vocal opposition to Critical Race Theory being taught in American schools.

In September last year, the National Association of School Boards (NASB) sent a letter to the Biden administration claiming parents were engaging in domestic terrorism by fighting against CRT and mask mandates.

Attorney General Merrick Garland subsequently announced the DOJ and FBI would establish a task force aimed at probing a “disturbing spike” in threats against school officials.

Joe Rogan is Under Unprecedented Censorship Attack, And He’s Never Been Happier

SUNY Professor: “It’s a Mistake” to Think Pedophilia is Wrong