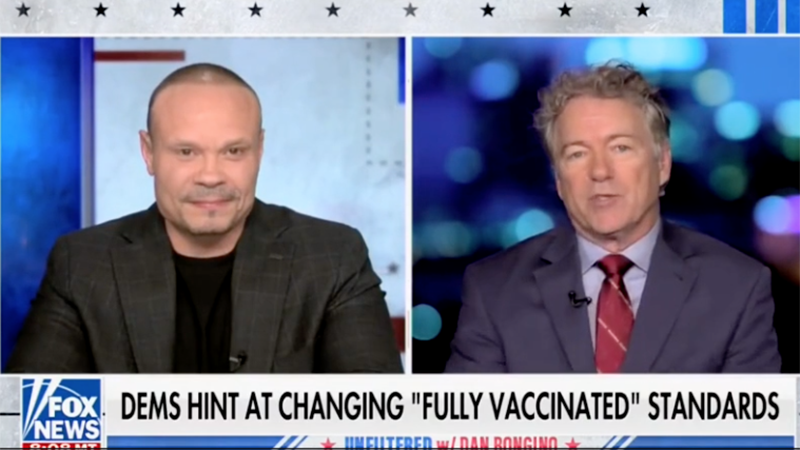 Senator Rand Paul has warned that as long as Americans continue to submit to government on coronavirus restrictions, the mandates and further erosions of freedom will never end.

Speaking with Dan Bongino, Paul responded to comments made last week by Senate Majority Leader Chuck Schumer who compared “anti-vaxxers here in this chamber” to “flat earthers” from 400 years ago.

Paul noted that “Schumer left out one thing, when they were denying that the Earth went around the sun. It was the government denying that and it was an independent scientist trying to set them straight.”

Paul further explained “the danger is when you let science be controlled by government, or by one sort of monolithic individual like Fauci, it really doesn’t have anything to do with science. Science usually discovers the truth eventually. But when science is dictated by the government, that’s when you get, you know, Flat Earthers.”

Paul continued, “I don’t think it’s been about science for a long time,” adding “It’s really the about conditioning the American individual to submit to government. And you’re right, it never ends, the goalposts will continue to change. And ultimately, more and more of your healthcare will be controlled.”

“You know, under socialized medicine, when we centralize all controls, most of these decisions are made by government bureaucrats like Fauci,” the Senator further urged.

The Senator also painted a grim picture of where this could all be heading, stating “If you love the dictates on vaccines, you’ll love it when Fauci is in charge of who can be dialyzed.”

“In England for many years, they wouldn’t dialyze you after age 50 because they thought that you don’t have much left to live and over a 50 year over the hill and I personally resent that now that I’m well past 50,” Paul expanded.

“But the thing is, nobody in government should be making those decisions. And once they do, it gets into rationing and arbitrary decisions by little autocrats like Fauci. And it’s a huge mistake to let this happen and we do need to fight back,” Paul declared.

Elon Musk: “I am Against Forcing People To Be Vaccinated; Not Something We Should Do In America”