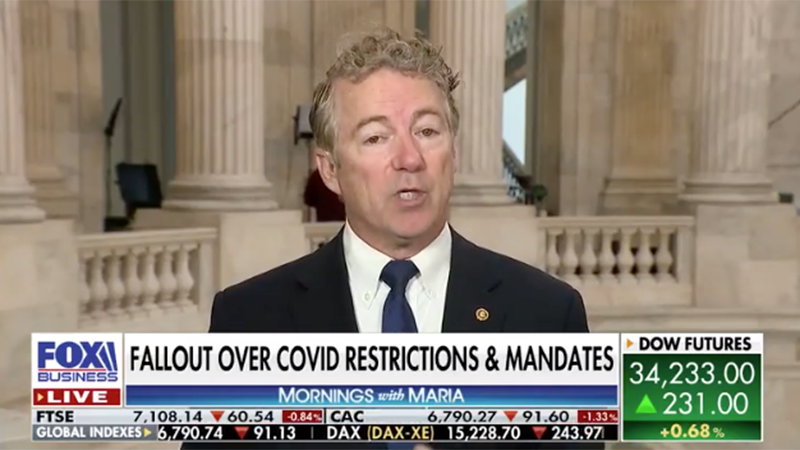 Senator Rand Paul escalated his feud with Anthony Fauci Thursday by calling for the NAID head’s arrest and imprisonment for continually lying to Congress and denying he funded gain of function research on coronaviruses.

Appearing on Fox Business, the Senator remarked “Fauci should go to prison for five years for lying to congress. They [the DOJ] have prosecuted other people and they have selectively gone after republicans, but in no way will they do anything about him lying.”

Paul added that Fauci “should be prosecuted for lying, and at the very least he should be taken out of his position because I think he cost people lives through misinformation.“

Every time he tells people, ‘Oh, wear a cloth mask,’ he is actually endangering people. If you are around someone with COVID, you don’t want to wear a mask because they don’t work,” he added.

“We’ve referred him to the Department of Justice,” Paul urged, adding “but then again, Merrick Garland is the one now going after parents that go to school board meetings, so I don’t have a lot of hope that Merrick Garland is objectively looking at Fauci’s lying.”

Meanwhile, Joe Biden is joking that Fauci is the President:

Paul joins Senator Ted Cruz who also this week called for Fauci to be prosecuted.

Elsewhere during the interview, Paul took aim at the stalled Biden spending bill, noting that Democrats “couldn’t run a 7-Eleven, much less the government.”

Paul explained “If they want to force it through with no amendments and they want to do it in a short period of time, they have to have unanimous consent. Well, a lot of us don’t consent… just because the Democrats are incompetent and haven’t brought it forward that we should speed up time to let them spend more money that is bankrupting our country.”

The Senator continued, “They’ve had plenty of time to go to committee, to do all the things they need to do to do it through reconciliation. Instead, they’re going to wait to the last minute and ask people like me, who are dead set against raising the debt ceiling, like, say, ‘Oh, can you pretty, pretty please speed it up and let only Democrats pass this?’ No. If they want to raise the debt ceiling, they ought to do it.”

Watch the full interview below: