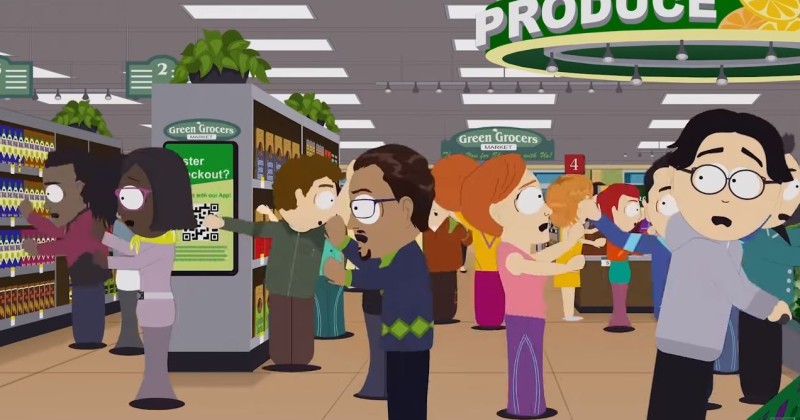 The new episode of South Park, which satirizes COVID hysteria, features a plot where a new variant of the virus is discovered, prompting mass panic and martial law.

The new installment is set in a South Park decades into the future where Stan, Kyle and Cartman are all grown up.

In one clip posted to YouTube, a doctor announces that the cause of Kenny’s death was a new variant of COVID, namely “the COVID delta-plus rewards program variant.”

The citizens of South Park then immediately panic and begin looting stores for food and toilet roll and clamoring for face masks, while parents rush to put their kids in front of Zoom remote learning calls.

The military then seals off South Park and tells the residents they are being quarantined and can’t leave.

“We have confirmation that one person in this community has never been vaccinated against COVID, so we must quarantine everyone,” says the military commander.

The only thing the creators appear to have got wrong is that authorities refuse to name the unvaccinated person because in the future it’s illegal to “single out or ridicule anyone for their personal beliefs.”

In our existence, the press and social media mobs would ensure they were doxxed and identified within hours.

The episode was obviously produced before the recent discovery of the Omicron variant, so its timing is impeccable.

Another clip from the episode illustrates what the show’s creators expect the world to look like in the near future.

In summary, Alexa assistants have now become annoying holographic people, everything has “plus” or “max” added on the end of its name, homelessness and violent criminality is widespread, police stations are boarded up, and children are all transfixed by virtual reality headsets.

Jimmy Carr is an Idiot