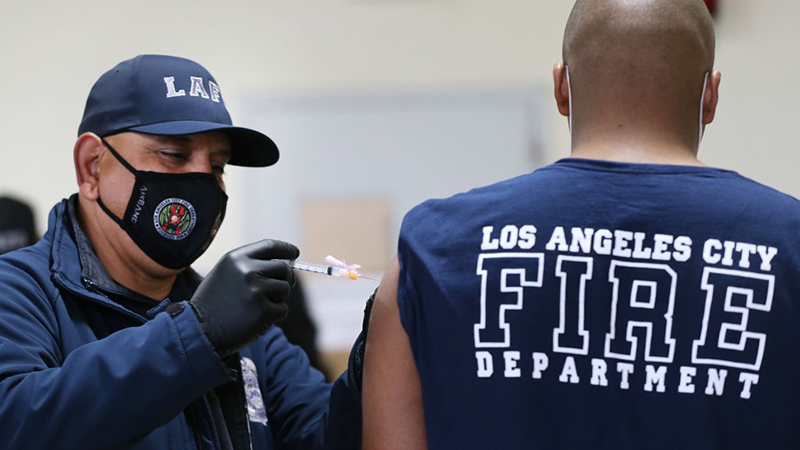 A firefighter in LA has been placed on leave and is under investigation after he literally wiped his ass with a vaccine mandate notification letter.

The Los Angeles Times reports “The LAFD member responded to receiving the non-compliance letter by dropping his pants and wiping his buttocks with the letter.”

The report adds that the firefighter left “fecal matter on the document, before dropping it to the ground, according to the Stentorians of Los Angeles City, a group representing African American firefighters.”

LAFD spokeswoman Cheryl Getuiza told the Times that “The department is aware of the seriousness of the allegations and took immediate action upon learning of this incident.”

Getuiza said that the first responder “will face the consequences of any inappropriate acts,” adding that “no matter how our members react, all city employees must abide by the city ordinance — either file for an exemption, get vaccinated, or face termination.”

A spokesman for LA Mayor Eric Garcetti said that the “mayor’s expectation is that fire department leadership will handle this matter definitively, and make it clear that these appalling actions will not deter enforcement of rules that we’ve put in place to save lives.”

The Fire Commission president Jimmie Woods-Gray added “I am beyond appalled at such an act by an LAFD firefighter.”

The deadline for city workers to “show proof of full compliance” with the vaccine mandate has been pushed back in LA to December 18 from the initial date of October 20. However, those who have not already complied are seeing $65 deducted from their paychecks twice a week, which the city says will cover the cost of COVID-19 testing.

Mayor Garcetti has said “Let me be clear: any employee who refuses to be vaccinated by this date should be prepared to lose their job.”

As we have previously noted, there is fierce resistance to the vaccine mandates among first responders.

Police and firefighters in Los Angeles have formed a resistance group against COVID vaccine mandates for state workers in the city, stating that they aim to “maintain human rights, constitutional rights, civil rights, and civil liberties as sovereign natural free human beings, and American citizens.”

First responders in Oregon have also brought a lawsuit against the state and the governor for imposing vaccine mandates, while firefighters and police in New York continue to defy the mandates.

Many police officers have made videos of themselves signing off after being forced to resign.

CDC Director Rochelle Walensky previously declared that the Biden regime is planning to provide vaccine hesitant police and other government workers with “education and counseling” to make them “comfortable” about taking the shots.

Speech Therapist: 364% Surge in Baby and Toddler Referrals Thanks to Mask Wearing

Young children developing cognitive problems due to widespread use of face coverings. 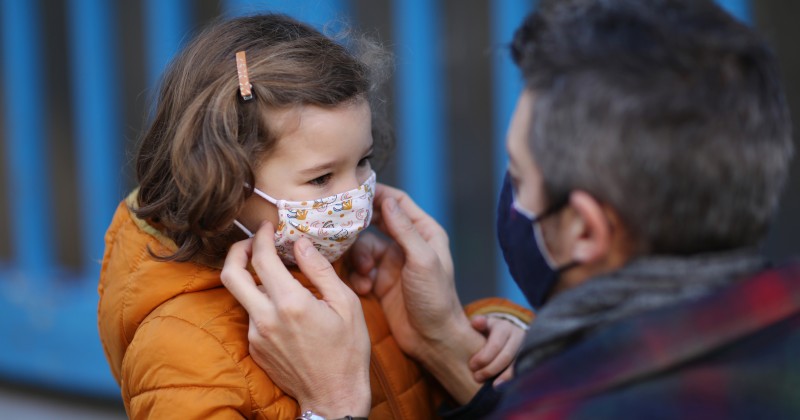 A speech therapist says that mask wearing during the pandemic has caused a 364% increase in patient referrals of babies and toddlers.

Jaclyn Theek told WPBF News that before the pandemic, only 5 per cent of patients were babies and toddlers, but this has soared to 20 per cent.

As young as 8 months old, babies start learning how to speak by reading lips, a thankless task if parents and carers smother themselves with masks to comply with mandates.

A speech therapist says her clinic has seen a "364% increase in patient referrals of babies and toddlers".

"It's very important kids do see your face to learn, so they're watching your mouth."

What the hell have we done?!

The news report featured one such mother, Briana Gay, who is raising five children but having speech problems with her youngest.

“It definitely makes a difference when the world you’re growing up in you can’t interact with people and their face, that’s super important to babies,” said Gay.

According to Theek, since the pandemic, autism symptoms are also skyrocketing.

“They’re not making any word attempts and not communicating at all with their family,” she said.

As we previously highlighted, Forbes deleted an article written by an education expert who asserted that forcing schoolchildren to wear face masks was causing psychological trauma.

Michael Curzon noted that two of the primary causes for this are face masks and children being atomized as a result of being kept away from other children.

“Children born over the past year of lockdowns – at a time when the Government has prevented babies from seeing elderly relatives and other extended family members, from socialising at parks or with the children of their parent’s friends, and from studying the expressions on the faces behind the masks of locals in indoor public spaces – have significantly reduced verbal, motor and overall cognitive performance compared to children born before, according to a new U.S. study. Tests on early learning, verbal development and non-verbal development all produced results that were far behind those from the years preceding the lockdowns,” he wrote.

Perhaps all the virtue signalers who think of themselves as such morally upstanding people for wearing masks will change their behavior given they are literally contributing to causing major cognitive problems in children.

Or maybe they simply won’t care, given that the mask is now a political status symbol above anything else.

Welcome to the new normal. 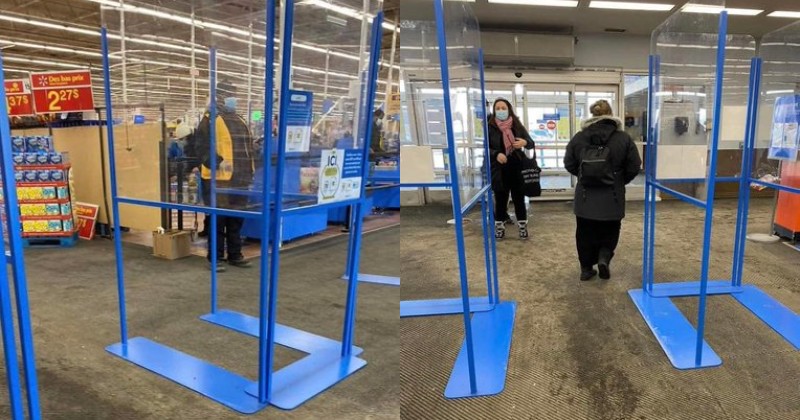 Photos from the entrance of a Walmart in Quebec, Canada show plexiglass vaccine passport scanner booths set up to screen customers entering the store.

According to Walmart, “The dividers are for associates when they scan vaccine passports.”

Welcome to the new normal.

Perhaps in the near future, the booths will be staffed by on-site nurses who will dole out regular injections for those who have forgotten to take their 24th booster shot.

It was initially suggested by some on Twitter that the booths were actually holding pens for the unvaccinated.

That’s not true, but it is true that big box stores like Walmart and Costco will now have employees accompany the unjabbed as they walk around the store.

That’s to comply with a new government decree with forbids the unvaccinated from purchasing any other items besides food and pharmaceutical drugs.

“For pharmacies located in big-box stores, such as Walmart or Costco, an unvaccinated person must be “accompanied at all times during his or her travels by an employee of the business, the pharmacy or any other person mandated by them for this purpose,” reports CBC, citing the decree. “This person may not purchase products other than those related to the pharmaceutical service they are receiving.”

This of course has little to do with stopping the spread of the virus – given the fact that there’s no evidence vaccine passports even work – and everything to do with punishing the unvaccinated for disobeying the regime.

As we previously highlighted, authorities announced a ban on the unvaccinated being able to purchase marijuana or hard liquor, another arbitrary punitive measure that makes zero sense whatsoever from a public health perspective.

So, if you’re unvaccinated in Quebec and walk into big box store you will need to be accompanied by an employee who will make sure you’re not there to buy socks or a toaster oven.🤡😂👍🇨🇦 pic.twitter.com/zaxEmuFxSB 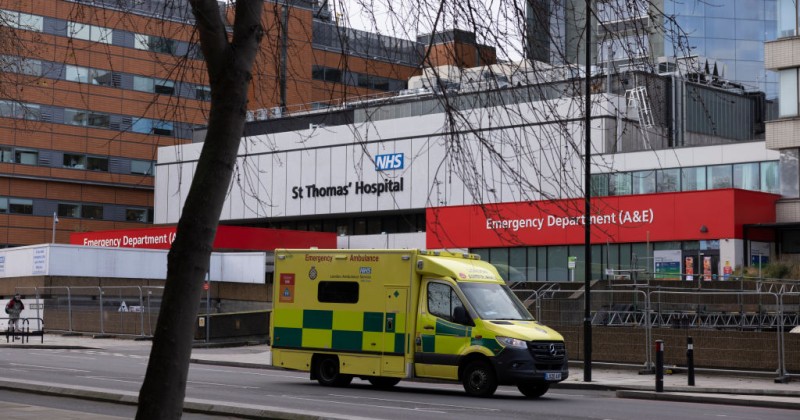 New figures show that over half of ‘COVID patients’ in hospitals in England are primarily being treated for something else.

Official statistics count 13,023 patients with COVID on Tuesday, but 6,767 were not being treated principally for the virus.

In London, the number is even higer, with 64 per cent of ‘COVID’ patients in hospital for a different reason.

Back in September, the number of patients who were being counted as COVID patients despite being treated for something else stood at around 23 per cent, meaning the figure has risen by 29 per cent in four months.

“The growing proportion of patients who are in hospital “with” COVID rather than “for” it is another sign that the current wave of the virus has not led to the same sort of pressure on critical care as in previous waves,” reports Sky News.

As we previously highlighted, a significant number of these COVID patients also only caught COVID after entering hospital for a different ailment.

Figures from December showed that 65% of people described as ‘COVID patients’ only tested positive for COVID after being admitted to hospital for something else.

The issue of whether official hospital patient numbers and death tolls should differentiate between ‘with COVID’ and ‘by COVID’ has been hotly debated for many months.

By artificially inflating numbers by counting people who are in hospital for something else, technocrats and lockdown lobbyists in the media have more ammunition to demand more restrictive lockdown policies.