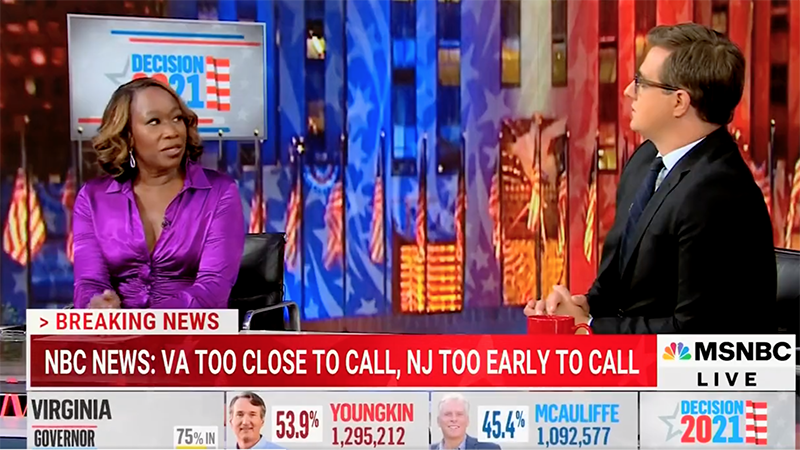 After it became clear that Republican Glenn Youngkin scored an upset victory for the governorship in Virginia Tuesday, MSNBC set about attempting to assassinate his character by immediately branding him a racist.

Host Joy Reid frothed that “The exit polls showed that, which was interesting, that the Coronavirus or that the virus was a very low importance to many voters,” further noting “It was ‘education,’ which is code for ‘white parents don’t like the idea of teaching about race.’”

Reid continued, “And I mean, unfortunately, race is just the most palpable tool in the toolkit, it used to be of the Democratic Party back in the day when they were Dixiecrats and now of the Republican Party.”

Later on, Reid described Republicans as a threat to national security, declaring “you have to be willing to vocalize that these Republicans are dangerous, that this isn’t a party that’s just another political party that disagrees with us on tax policy, that at this point, they’re dangerous.”

She continued to blather “They’re dangerous to our national security, because stoking that kind of soft white nationalism eventually leads to the hardcore stuff. It leads to the January 6 stuff because if people are tolerant of it in your party, they’re tolerant of the soft racism, it’s a really short trip to get to the January 6 insurrectionists.”

The salty bitterness increased as Republicans congratulated Youngkin on a victory for personal freedom:

Reid continued to call everything about Youngkin racist:

Reid claimed that Youngkin has “found a way to launder a pretty racist trope, this idea that we cannot talk about America’s history because it hurts my feelings.”

It doesn’t really jive with reality though does it: