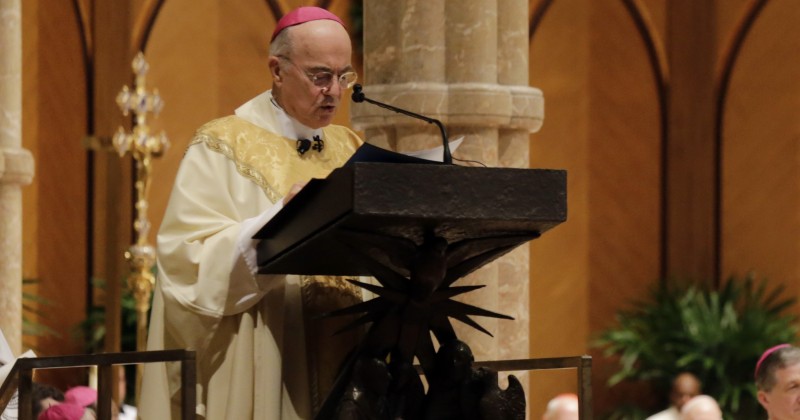 Archbishop Carlo Maria Viganò has written a stunning letter to America’s bishops in which he makes several astounding claims about COVID-19 jabs and the Church’s role in promoting vaccines.

Viganò asserts that vaccines normally go through years of rigorous testing, and that the lack of such a process in the case of COVID-19 jabs represents public health authorities conducting “experimentation on the entire world population.”

The Archbishop referenced drug treatments that have proven effective in fighting COVID without the risks of vaccines, noting that such drugs have been discredited by global health bodies and the media.

“It must be reiterated that there are effective treatments which cure patients and allow them to develop permanent natural immune defenses, something that the vaccines do not do,” he wrote. “Furthermore, these treatments do not cause serious side effects, since the drugs that are used have been licensed for decades.”

“International standards specify that an experimental drug cannot be authorized for distribution except in the absence of an effective alternative treatment: this is why drug agencies in the USA and Europe have prevented the use of hydroxychloroquine, ivermectin, hyper-immune plasma, and other therapies with proven effectiveness,” he added.

Viganò goes on to state that the vaccines proving ineffective in preventing people from getting and passing on the virus means they can’t even be called vaccines.

“In fact a “vaccine” is defined as a medicinal preparation aimed at inducing the production of protective antibodies by the organism, conferring specific resistance against a specific infectious disease (viral, bacterial, protozoal). This definition was recently changed by the WHO, because otherwise it would not have been able to include anti-Covid drugs, which do not induce the production of protective antibodies and do not confer a specific resistance against the SarsCoV-2 infectious disease.”

The Archbishop went on to assert it was a moral “duty” to refuse inoculation given what we now know about the vaccine program.

Viganò went to to assert it would be “immoral and unacceptable” for Catholics to take the vaccine given revelations by Pfizer executives that the jabs contain material from aborted fetuses.

The Archbishop expressed his fury at other members of the clergy and Pope Francis himself for facilitating a “crime against humanity” and “satanic action against God.”

Viganò pulled no punches in outlining the wider agenda at play.

“I realize that it may be extremely unpopular to take a position against the so-called vaccines, but as Shepherds of the flock of the Lord we have the duty to denounce the horrible crime that is being carried out, whose goal is to create billions of chronically ill people and to exterminate millions and millions of people, based on the infernal ideology of the “Great Reset” formulated by the President of the World Economic Forum Klaus Schwab and endorsed by institutions and organizations around the world.”

Viganò previously wrote to then President Donald Trump asserting that the COVID-19 pandemic is part of a plot to impose a “health dictatorship” and that Trump is “the final garrison” in stopping this agenda.

Last year, we also highlighted how Cardinal Raymond Burke warned that the COVID-19 pandemic is being exploited by proponents of “The Great Reset” to “advance their evil agenda.”

FDNY Union Head: De Blasio Has Ensured People Who “Care For Criminals Have More Rights Than People Who Care For The Average New Yorker”