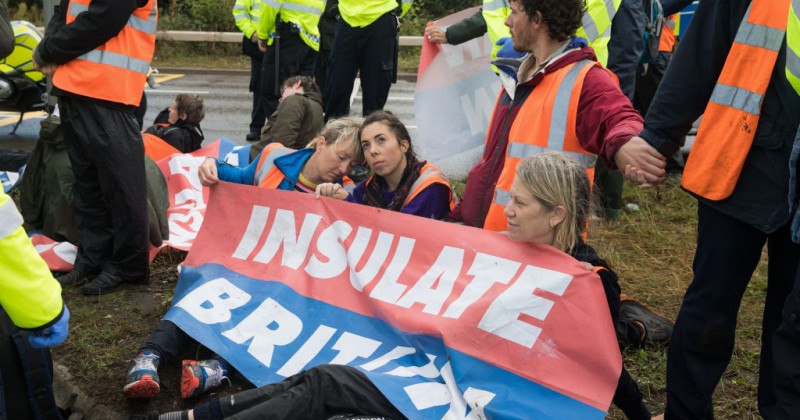 After environmentalists from far-left group Insulate Britain, an offshoot of Extinction Rebellion, blocked the M25 yet again, they thanked the police for treating them kindly.

And therein lies the problem.

For weeks, the activists have been blocking major roads around London, generating chaos for commuters trying to get to work, causing accidents, and preventing seriously ill people from reaching hospital.

This led to an injunction against the group which meant that its members could be given prison time for their actions.

However, few if any of them appear to have been sent down and about 40 of them yet again blocked the M25 at Junction 31 and the London Road A1090 near the Dartford Crossing earlier this morning.

Sky News reports that one of the protesters thanked police for treating them with kid gloves.

“Many people are going out of their way to thank us. Some come out of their cars to thank us, some are police officers involved with our arrests. To them, we bring hope – we haven’t yet given up. We are still pushing for life saving changes,” said Dr Diana Warner.

As you can see from the video above, officers have been caught on camera before acting like they’re providing friendly customer service to the activists rather than enforcing the law.

Why on earth are police officers treating these eco-terrorists like they’re children in therapy?

Compare this to the treatment of anti-lockdown protesters, who are routinely brutally manhandled and assaulted by riot police.

Not only can this group rely on the protection of the state, its leaders don’t even follow their own principles while demanding everyone else conform to their warped beliefs.

Only last week, the leader of Insulate Britain Liam Norton was asked why he hasn’t insulated his own home.

“Because I’m a hypocrite,” he said, adding, “I don’t particularly care about insulation.”

As we document in the video below, despite being called ‘Extinction Rebellion’, the group is actually moving Britain closer to precisely what the establishment wants – a ‘green economy’ that will cause economic devastation, food shortages, energy rationing and climate lockdowns.

The Truth About the ‘Green Economy’