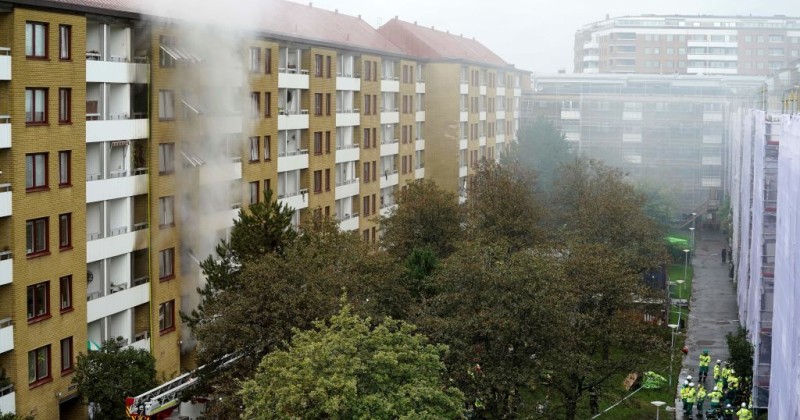 A powerful blast that ripped through an apartment block in Gothenburg was likely caused by an explosive device, raising the prospect of another gang-linked attack in multicultural Sweden.

The explosion tore through the building in the Annedal district in central Gothenburg on Tuesday morning, starting a major fire.

“The explosion rocked through the building just before 5am local time, damaging three stairwells,” reports RT. “Some residents used tied sheets to escape from their homes through windows, as the fire ignited by the blast spread and sent thick plumes of grey smoke in the air.”

Authorities quickly ruled out a gas explosion as the cause of the blast, noting that there was no gas pipeline in the immediate area.

Police spokesperson Thomas Fuxborg confirmed that the working premise is that an explosive device was deliberately planted.

Up to 25 people sustained injuries, with four hospitalized in serious condition.

According to Henrik Palmgren, the target of the blast could have been a police officer who was working on targeting criminal immigrant gangs in the area.

Some sources claim that a Swedish police who worked on criminal immigrant gangs lived in one of the apartments in this complex and he most likely was the target. This might also be a immigrant gang feud. Plenty of those in Gothenburg.

Replacing the Swedish people is so exciting. pic.twitter.com/mEhLf75Ibe

An investigation earlier this year found that Sweden had gone from being one of the safest European countries 20 years ago in terms of gun crime to the second most dangerous, with most shootings linked to criminal migrant gangs.

I talked about this over two years ago and was on the receiving end of a huge media demonization campaign. They're somewhat quiet about it now. pic.twitter.com/iu1Ja54cHK

“Sweden has experienced a sharp rise in explosions in recent years, predominantly related to conflicts between warring criminal gangs,” reported Quillette’s Paulina Neuding. “The use of explosives in the Nordic country is now at a level that is unique in the world for a state not at war, according to police.”

Like the rest of Europe, Sweden has also suffered an alarming rise in gang rapes and sexual molestations since throwing its borders open to mass immigration from the Middle East and North Africa.

Meanwhile, we continue to be told that diversity is a strength.

Video: Texas Students Agree With Biden Border Policy, Until They See The Pictures