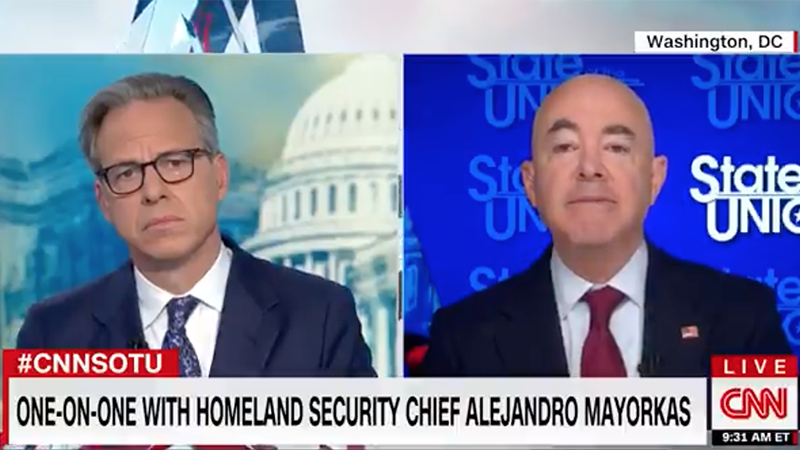 After a week of the Biden administration and Democrats pushing fake news that border patrol agents whipped migrants, and even removing them from duty, even CNN’s Jake Tapper described the story as “patently false” during an interview with DHS Chief Alejandro Mayorkas.

“Some of the initial descriptions of those images were just patently false,” Tapper said, adding “There’s now video out there that provides more context.”

Tapper gave Mayorkas an opportunity to set the record straight, asking “Having seen the video are you certain that there was actually wrongdoing?”

But the DHS chief refused to admit the descriptions of the mounted agents were wrong, prompting Tapper to further note that if Biden is already saying that the agents are going to have to “pay,” how can the investigation be independent?

“Can the Border Patrol count on you and President Biden, who has said that people will pay, to come to a determination based on the facts and not based on Twitter outrage?” Tapper asked.

In a further interview with Fox News’ Chris Wallace, Mayorkas declared that the flood of illegal migrants at the border, and the subsequent release of thousands of them into the U.S. is “one of our proudest traditions.”

Wallace then asked why the Biden administration hasn’t erected a “wall or a fence” in response to the crisis.

In related news, Axios issued an update addressing the fake ‘whipping’ news, deleting a tweet that stirred up and spread the disinformation.

Texas Governor Greg Abbot also vowed to hire any border agents who are punished by the Biden administration for their actions in protecting the border.