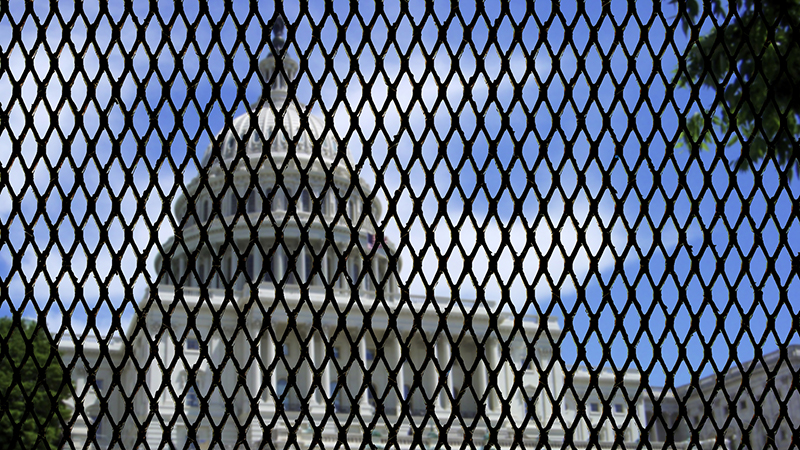 The black prison-like fencing that was a mainstay around Capitol Hill during the first half of the year has gone back up ahead of a protest scheduled this weekend, which President Trump has warned is a “setup”.

The fencing has been re-erected in response to the “Justice for J6” rally planned for Saturday at the US Capitol building, which is focused on the 600 defendants being detained for being part of the January 6th incident.

Video of the fencing also reveals that a motion-tracking watchtower has been put into place, presumably fitted with face recognition cameras and whatever other surveillance equipment is at hand to deploy on Americans practising their right to freedom of speech.

Capitol Police have said the fencing will come down again straight away, if the protest is carried out peacefully.

A statement also noted that “The USCP has asked the Department of Defense for the ability to receive National Guard support should the need arise on September 18.”

As The Hill contributor Don Wolfensberger notes, “The new protective barrier, even if only temporary, as officials insist, still reinforces public perceptions that Congress is once again walling itself off as fortress on a Hill, above and apart from the people it purports to represent.”

He continues, “And that perception only further exacerbates the widening gulf of distrust between the government and the governed. Will a new fence be re-installed every time a planned rally threatens potential violence against Congress?”

Meanwhile, President Trump has warned that the event on Saturday could be used as a “setup”.

In a further statement, Trump noted “Our hearts and minds are with the people being persecuted so unfairly relating to the January 6th protest concerning the Rigged Presidential Election.”

He added that “in addition to everything else, it has proven conclusively that we are a two-tiered system of justice. In the end, however, JUSTICE WILL PREVAIL!”

Carlson: Milley Undercutting President Trump “One Of The Scariest Things That Has Ever Happened In This Country”