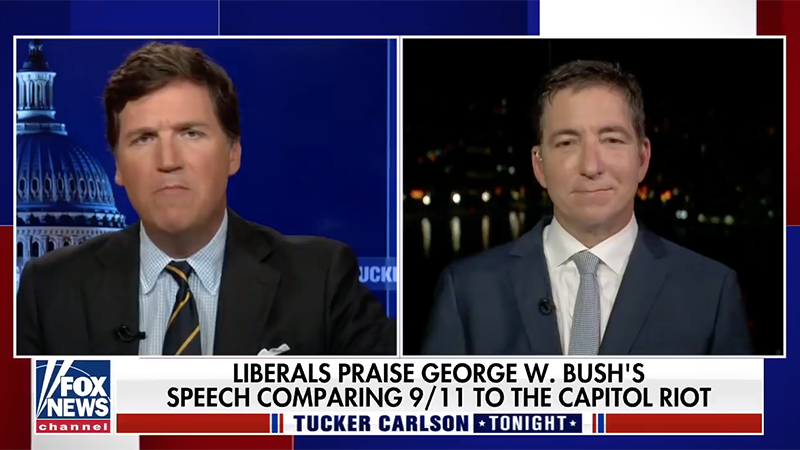 Appearing on Tucker Carlson’s show, Journalist Glenn Greenwald pointed out how George W. Bush has gone from being roundly reviled by the left to being weirdly held up as some kind of icon as soon as the he began criticising President Trump and his supporters.

“It’s worth remembering how liberals used to be overflowing with so much hatred and contempt for George Bush,” Greenwald noted, adding “They frequently compared him to Adolf Hitler and claimed his family was crucial to the rise of the Nazi party, claimed (something I agree with) that he is a war criminal.”

Greenwald continued, “they claimed he was so filled with racism that he purposefully allowed New Orleans to drown because so many black people lived there.”

Greenwald also pointed out that “every liberal I know believes George Bush stole at least one election, and maybe even two.”

“Yet suddenly as he began lightly criticising Trump, they began saying things like ‘you know what, I didn’t agree with Bush all the time, but I never questioned his character and his values and his patriotism,” Greenwald urged.

He continued, “this weekend it turned into this love-fest. I mean they dripped with effusive praise for him because of what he said, essentially that the 9/11 attacks are the same as the three hour riot on January 6th, and more importantly that the people who did 9/11, Al Qaeda, are similar or identical to ‘the same foul spirit’ as he put it, Trump supporters essentially.”

“It is a priority of the political class to launch a domestic war on terror. You can go back to before January 6th, to November 2020 and see articles in the Wall Street Journal in which Joe Biden was saying ‘my top priority once I’m elected as president will be to combat domestic extremism,” the journalist added.

Greenwald further urged that “it’s demented to compare 9/11 and January 6th, but it is so central to the agenda of the security state, to the Democratic Party, to essentially initiate a surveillance regime, a detention regime against people on the right who are against the establishment.”

The comments come after Trump himself slammed Bush over the comments he made at the 9/11 memorial:

VIDEO: Senator Demands To Know “Who Cuts Off Biden’s Mic?”; “We Need To Know Who’s In Charge”; “This Is A Puppeteer Act”

Video: Sleepy Joe IS A Uniter After All As Yankees And Mets Fans Both Chant “F*ck Biden”