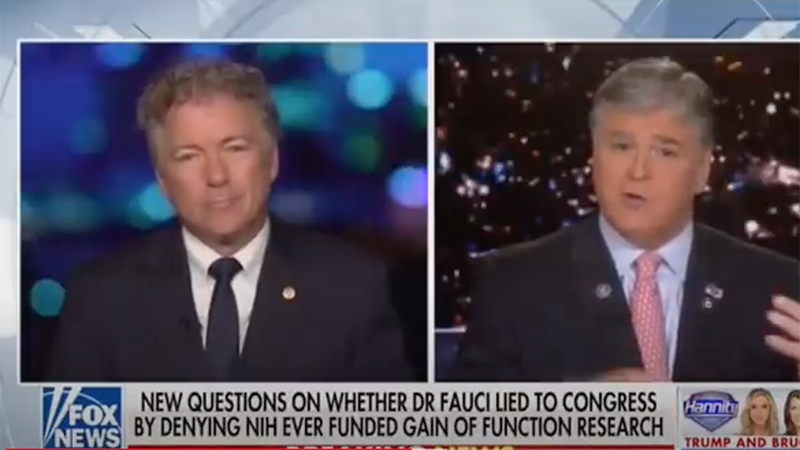 Appearing on Hannity Wednesday night, Senator Rand Paul responded to the emergence of yet more proof that Anthony Fauci lied to Congress regarding the funding of coronavirus gain of function research, reminding viewers that the offence is a felony punishable by five years jail time.

“I find that hard to believe that we still would have someone with such poor judgment, who believes that even a pandemic would be worth it, that this person is in charge of the research for our government, I find that astounding,” Paul declared.

“The judgment that we should continue to fund this lab and—that the virus in all likelihood came from the lab. I think it’s such incredibly poor judgment that he should be immediately removed,” Paul added.

The Senator added, “We’ve referred it to the Department of Justice. I don’t think Biden’s Department of Justice will do anything with it but yes, it is very dangerous to have public officials who we need to have trust in coming and lying to us, but [Fauci] has lied dozens of times.”

Paul continued, “Usually, he tells us that it’s for our own good but yes, he has dissembled, he has obfuscated—there’s other nicer words—but he has definitely lied to the American public and he should be held responsible but not just that.”

Adding to Paul’s comments, Senator Tom Cotton called for prosecution against Fauci “to the fullest extent of the law.”

Cotton urged “You know, for 18 months, he’s been saddling up his moral high horse and clucking his tongue at college kids who want to go celebrate a football game in an outdoor stadium on a nice fall day or parents who don’t want their kindergartners to have to wear masks their entire lives, telling you you have to wear three masks, when all along, he’s been lying, not just to Congress, but to the American people about his role in funding the very reckless, dangerous research at a Chinese Communist lab that unleashed this pandemic on the world.”

“It is a disgrace and it’s time for Tony Fauci to be held accountable,” Cotton added.

Meanwhile, Fauci appeared on both MSNBC and CNN, with neither network even bothering to ask a single question about the new report detailing how Fauci funded the Chinese research and then lied about it.